Blue Mosque, Istanbul – What You Need to Know Before You Visit 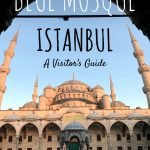 Istanbul is one of world’s greatest cities to live in and visit, and there are many wonderful tourist attractions to consider while you’re there – even for a quick transit. One of the most visited places in Istanbul is the Blue Mosque.

It’s easy to assume that the top sights in a busy city like Istanbul are just tourist traps; however, the Blue Mosque, along with Hagia Sophia and Topkapi Palace, are absolute must-visits.

Here’s what you need to know when planning a visit to the Blue Mosque.

The official name of the Istanbul Blue Mosque is Sultan Ahmet Camii, or the Sultan Ahmed Mosque. Its namesake, Sultan Ahmet I, wanted to highlight the Ottoman Empire’s recent capture of Constantinople from the Byzantine in the 15th century.

Mosque construction started in 1609. Its architectural style is a blend of Christian Byzantine and Islamic Ottoman, making it one of the most unique structures in the world.

When completed in 1616, the Blue Mosque was the last grand mosque of the classical period, with its distinctive six minarets lining the Istanbul skyline.

These days, people popularly refer to the mosque as the Blue Mosque, due to the blue Iznik tile design on the interior of the domes.

The Blue Mosque was strategically located next to the existing Hagia Sophia, which pre-dates it by about 1,100 years. They built the mosque here to to compete with Hagia Sophia.

A typical mosque has one, two, or even four minarets. During construction, the unusual choice of six minarets quickly turned controversial, because it rivalled Mecca’s holiest mosque with six minarets.

Out of respect to the Holy City of Mecca and to Islam, Sultan Ahmed I sent a construction team to Mecca to add the seventh minaret to the Great Mosque in Mecca, Saudi Arabia.

It is visible from afar, even from the Asian side of the city across the water.

The closest tram line is the T1 Line – Sultanahmet stop – which is a quick walk from both the Blue Mosque and Hagia Sophia.

From the airport, you need to board Istanbul’s subway system, then transfer to this tram line.

Istanbul’s Blue Mosque is an active place of worship. Anybody who practices Islam is more than welcome to join the prayer sessions.

Times for these prayer sessions change throughout the year, based on the sunrise and sunset times.

Blue Mosque visiting hours are 9am to 6pm, 7 days a week.

Non-worshiping visitors may not enter the mosque during prayer sessions. These sessions take place five times per day.

Check the worship hours posted on the board located at the main entrance in the inner courtyard. Each session lasts roughly 30 minutes.

On Fridays, they close the mosque to tourists for about two hours at noon to accommodate the weekly sermon. This also applies to any holy days in the Islamic calendar.

Tips for Visiting the Blue Mosque

There are several entrances to the mosque that you can use. For the best experience though, enter through the northwest gate by the Hippodrome.

Through the gateway, you will arrive in the inner Blue Mosque courtyard.

There, you can appreciate the grand scale and symmetry of the Blue Mosque’s main dome.

The grand entrance into the inner courtyard

While there is a “No Smoking” sign in this courtyard, as you expect from a religious complex, many locals ignore the rule and light up anyway. From this marble courtyard, you can see four of the six minarets high up in the sky.

If you happen to be here during the call to prayer, you will be surrounded by the serene sound of song echoing throughout the stone courtyard!

This inner courtyard is surrounded by arch walkways to all four sides. If you are interested in learning more about Islam, you may want to check out the series of panels located along the eastern wall.

True to Islamic space design, a stone water fountain adorns the middle of the this courtyard in front of the main entrance.

Here, you can find the announcement board, with the hours of operation and more information about the Blue Mosque.

If you need more information, you can also find staff with ID badges to help you.

The interior of the Blue Mosque

The main entrance of the inner courtyard is reserved solely for worshipers. Tourists should follow the sign to the right side of the courtyard to the eastern corridor.

Admission to the Blue Mosque is free. There is a donation box for the upkeep and preservation of the mosque located at the exit door. If needed, you can ask a staff member to issue you an official receipt for your gift.

Dress appropriately. As with any place of worship, a dress code applies to both men and women. No shorts or tank-tops. Women must cover their heads and shoulders. If you need a headcover, borrow one at the tourist entrance.

Remove your footwear. Small plastic bags are provided for your shoes, and shoe racks are available inside if you opt to leave them there instead of carrying them around. You may not wear shoes again until you completely exit through the western door.

Photography for personal use is fine. Any professional or flash photography requires the permission of the staff.

You may not bring food or drink inside.

The Blue Mosque is closed during prayers; however, if you happen to be inside, you may be able to sit down and appreciate the Imam’s powerful chant.

Enjoy your visit! The Blue Mosque’s interior will take your breath away.

What to do at the Blue Mosque

To get the most out of your visit, take your time to observe your surroundings.

Look at everything and how detailed it all is.

Islam prohibits art in the form of humans or animals. The focus comes down to the intricate details of design in form of motifs and calligraphy.

You can see the calligraphy surrounding the inside of the main dome with Quranic verses.

Inside the interior domes, you can find 20,000 intricate blue tiles. These tiles give the mosque its name. They were shipped from Iznik (Nicaea), an ancient Roman town, about 100 miles (160 km) away.

The famous regal red carpet covers every inch of the space.

People donate these carpets and they replace them as needed.

The majority of the front of the mosque, divided by a short fence, is the men’s area and is off-limits to tourists. The non-worshiping visitors’ area occupies the tourist pass-through walkway behind this fence.

The four massive pillars – the “Elephants feet” – are massive structures. They are 16 feet in diameter and support the domes above your head.

A picture of 4 massive pillars from the Informational panel in the inner courtyard.

The Blue Mosque interior has with 250+ windows that were once covered by Venetian rose windows. Unfortunately, they replaced most of them with cheaper versions.

These windows allow the sunlight to penetrate the main chamber, although they now use electric lighting to illuminate the mosque.

Many hundreds of wires support the light fixtures that dominate the interior. Many of these light bulbs are made of ostrich eggs, which help to deter spider webs.

When completed in the 15th century, the Blue Mosque complex contained a hospital, a madrasah (Islamic school) a hospice, and several other structures.

Several of these components are long gone; however, you can still find Sultan Ahmet I and his family tombs on the north side of the Mosque.

The Blue Mosque is within walking distance to many great places in the historic Sultanahmet neighborhood, like the Hagia Sophia and the Basilica Cistern.

The walk from the Blue Mosque to the Grand Bazaar is a 15-minute stroll through the heart of tourism in Istanbul. Spend your time wisely here. It’s easy to get lost in this amazing neighborhood. Spend the whole day here.

For the best aerial view of the Blue Mosque and its surroundings, head to the Seven Hills Hotel. There, you can view the spectacular Sultanahmet skyline from the hotel’s rooftop.

Dine and drink outside on the patio!

As beautiful as it is, there are some travel annoyances around the Blue Mosque (and Istanbul’s tourist sites in general). Friendly locals approach foreigners and strike up a conversation. “Where are you from?” Then, “Oh, what a coincidence – my uncle now lives there!”

Or “I want to practice my English with you.” They’ll then start to show you around and point out some fun facts about wherever you happen to be.

However, it’s usually just a way to guilt you into visiting their carpet store or gift shop that just happens to be right around the corner.

Here’s how we deal with pushy street vendors.

For More on Turkey: When we travel, we use Lonely Planet

Travel Scams and How to Avoid Ruining Your Trip
Next Post: How to Visit the U.S. Space and Rocket Center in Huntsville, Alabama