10 Cool Facts About Antarctica That You Probably Didn’t Know 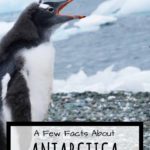 Think you know a lot of facts about Antarctica?

Sure, you know there are penguins, seals, freezing weather, research stations and more. But what else is there to know?

Well, it turns out that there a lot of cool facts about Antarctica that many people don’t know.

At least we didn’t.

When we visited, we had a lot of preconceptions about the Last Continent. But it turns out, a lot of the stuff we thought we knew about Antarctica either wasn’t true or was quite a surprise to us

If you’re planning an Antarctica cruise, here are some Antarctica facts that might come in handy:

For many decades, countries have diplomatically battled over Antarctica. Chile has a base there that includes families, schools, a post office, and more. Argentina once tried to plant prehistoric artifacts to “prove” sovereignty.

None of that worked. Antarctica is owned by no one and by everyone.

That doesn’t mean you can just go there. Well, actually, it kinda does. But, by convention, you need to get permission from your own country if it’s a member of the Antarctica Treaty.

The treaty is a bit complicated. Your best bet to avoid the issues is to book a tour with a reputable company.

In 2019, we went to Antarctica. While most of us think of Antarctica as a vast expanse of ice and frozen landscapes, that’s not always the case.

When we visited King George’s Island, the temperature was above freezing. A few people left the ski pants on the boat or shed them on the island. It was pretty warm (relatively speaking)!

On the other hand, the previous day was much colder with hail and wind beating down on everyone. So there’s that!

But you probably don’t need to bring all of this with you. There’s a good chance that the company you’re going to Antarctica with provides at least the outer layers.

Our company, One Ocean Expeditions, provided us with the following gear:

The rest, we brought ourselves. And we didn’t pay a lot. Here’s our packing list for Antarctica, if you’re interested and want to do it very cheaply!

Be sure to check with the company you’re using before you go. There’s a good chance they provide a lot of the clothing you need.

Even the ones that don’t often rent it to you.

If you decide to take a “luxury” cruise to Antarctica on a gigantic ship that holds 300-500 people, you might think you’ve got it made! First class cabins, 5-star meals, massages, etc.

But what you may not get on a cruise like this is the chance to get off the ship and interact with the wildlife – which, for us, is the entire point of coming to Antarctica in the first place.

Only 100 people are allowed to be in any one location at any given time:

Cruise ships carrying more than 500 passengers will be prohibited from landing anyone. Only 100 visitors are to be allowed on shore at any given time, in an attempt to prevent damage to the region’s unique ecosystem.

What does this mean? It means that you might just end up cruising by each destination and never get the chance to see anything up close.

And if you have 300 or more people on your ship, you’ll spend most of your time in rotation. 100 people go to shore and come back, then another 100, then another, and so on.

Our ship, the Akademik Ioffe, carried 100 people. There was no rotation. We did every excursion – sometimes 3 a day.

You’ll see plenty of penguins on Antarctica – just maybe not the ones you’ve been led to believe you’ll see.

I think March of the Penguins kind of set unrealistic expectations for all of us. They’re the only penguins some people even know about, let alone expect to see.

A better film to watch is DisneyNature’s Penguins, about an Adele named Steve. The camera work is stunning!

Unless your itinerary takes you to the Weddell Sea, on the eastern side of the peninsula, you likely won’t see Emperor Penguins. That’s where most of them are.

And they reside almost exclusively south of 66° out on sea ice, which makes it much more difficult and dangerous to see them.

But have no fear. While you might not see the famous Emperors, you’ll almost certainly see plenty of adorably cute Chinstrap, Gentoo, Adele, and Macaroni penguins.

So don’t worry, you’ll get your fix of penguins here!

OK, maybe this is one of those Antarctica facts that most people actually do know. But I’ve heard people express surprise that there aren’t polar bears in Antarctica.

One of my favorite cartoons is The Far Side, by Gary Larson. In The Pre-History of the Far Side, Larson explained that a particular cartoon was responsible for a huge number of reader letters.

The cartoon depicts a group of penguins on an ice sheet, floating somewhere in Antarctica. In the middle of this group sits a huge polar bear, with a beak strapped to its snout as a disguise.

One penguin looks at another and says:

“And now Edgar’s gone… Something’s going on around here.”

Of course, there are no polar bears on Antarctica. If Edgar did disappear, it’s more likely he was snatched by a Leopard Seal or an Orca.

Polar Bears don’t exist in Antarctica. Some are Canadian. Others are Russian and Norwegian.

But outside of zoos and aquariums, polar bears and penguins have never met.

7. Internet in Antarctica: Good luck with that!

If you want WiFi, you’re going to have to pay quite a premium for it. And that’s because you’ll be connecting to satellites.

The latency is going to be high and the bandwidth is mediocre at best. Scientists on Antarctica have to schedule time to use the “Internet” so that they can use the satellites when they are available.

Your ship will probably be the same. On the Akademik Ioffe, there is no Internet. However, you can (for about $30 per trip) get access to very basic email. The staff will create a ship’s account for you so that you can send and receive email.

You’re limited to text only, and 200 kb per email.

I certainly understand the desire to keep in contact with loved ones on a trip to a faraway place. Having said that, even if your ship does offer full Internet, I recommend skipping it.

Antarctica, for us at least, was once in a lifetime.

Spend your days soaking up the sights. Listen to the sounds of whales spouting in the distance (or up close). Get to know the people you’re traveling with.

How often do you get to just disconnect and enjoy life? Make this trip the time to do that. You’ll enjoy Antarctica more if you skip Facebook, Instagram, and WhatsApp for the time being.

And you often won’t have a choice anyway!

Have a drone? Leave it home!

There is a “no drones” policy on Antarctica. And it’s easy to understand why. As a tourist, you are prohibited from directly interfering with the wildlife.

In other words, they can come to you, but you cannot go to them.

Drones are loud. And to animals, they’re scary. If you’re going to Antarctica, leave your drone at home. You won’t get to use it.

If you want to do work in Antarctica using a drone, you’ll need to come here specifically for that purpose and get all the permits to do what you need to do.

It’s almost certainly not going to happen if you’re a tourist on a cruise.

As our cruise director said, “If anyone here is a commercial drone pilot, come up and talk to me about it. But I’m still going to say ‘no.'”

Leave the drone at home.

I don’t get seasick. I’ve been on a lot of rough seas and I have never once succumbed to motion sickness because of it. So, did I take seasickness medication on this trip?

You bet I did!

Like it or not, it’s a fact of life on the Drake Passage: Several of the people who said “I never get seasick” got seasick.

I “knew” I wouldn’t get sick. More importantly, I knew that if there was even a small chance of me getting sick, it would ruin 1-3 days of a ten day trip.

Monetarily speaking: $1,000-$3,000 – all because I was too stubborn to take a few dollars worth of medication.

Don’t risk it. Take a look at this video. This is what it’s like to cross the Drake Passage on a good day!

There’s a term for it. It’s called “Drake Shake.”

Even if you are like me and “know” you won’t have an issue, take Dramamine or wear a patch. You paid way to much for the trip to risk ruining even one day of it.

Your ship probably has an on-board doctor. He or she will have what you need if you didn’t bring it.

Seasickness is one of those Antarctica facts of life that many people experience.

This is a surprise to some people – including me. But it makes so much sense that you need to wear sunscreen in Antarctica.

You’ll be walking on snow and ice for the entire trip. Any exposed skin will be assaulted by the sun on the way down and then, again, when it reflects back up from the ice and snow.

And even if it’s not freezing wind, it can tend to dry out your skin.

So wear sunscreen when you’re in Antarctica – even if you think you don’t need it. You’ll be glad you did.

Antarctica is a desert, after all! So do what you’d do in most deserts! Slap on the sunscreen in Antarctica.

OK, so this is an Antarctica fact that’s not so “little known.”

For us, this was the trip of a lifetime. We got amazing photos and even stunning videos!

We saw leopard seals, countless Gentoo penguins, chinstraps, and others. Plus herds of fur seals!

Kayaking with humpback and minke whales was one of the most awe inspiring experiences of our lives.

Halef even took a polar dip in the Antarctic Ocean!

If you have the opportunity to go to Antarctica, the answer should absolutely be YES!

And this is why we came to Antarctica in the first place. Halef was here to complete his goal of joining the Seven Continents Club (SCC).

Here’s a taste of one of the excursions you may experience when you are there:

We hope you’ve enjoyed some of these lesser known Antarctica facts! If you want to experience Antarctica for yourself, we highly recommend One Ocean Expeditions.

The boat and staff are amazingly fun and they’re not as expensive as many other companies.