Day of the Dead in Mixquic, Mexico 2019 – Things to Know Before You Go 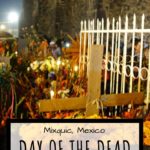 If you’re planning on spending the Day of the Dead in Mixquic, Mexico, you’re in for a real treat. This small village makes for a terrific day trip from Mexico City and has a population of about 12,000 people.

But when the Day of the Dead comes around, that population explodes by tens of thousands more people who come for an authentic Dia de Muertos celebration!

While the festival is a lot of fun, and very touching, to be honest, there are a few things you need to know when you come here.

Mostly logistics of how to get here and back.

How to get to San Andrés Mixquic

There are several ways you can get to Mixquic from Mexico City. The biggest differences between them are the cost, level of comfort, and in some cases, the time it takes you to get there.

While you can get to Mixquic by bus, subway, or taxi, we found that the most uncomplicated way to get there was using Uber. It’s less than $25 and takes about 90 minutes.

The ride is a little bumpy, so keep that in mind if you like to carry a coffee with you!

If paying $25 for an Uber is not your thing, you can get to the Day of the Dead in Mixquic using the CDMX Metro.

Taking Transit from CDMX to Mixquic

The cheapest way to get from Mexico City to San Andres Mixquic via transit is to get on the train at one of the main Mexico City stations and make your way to Tlàhuac.

That will cost you just a couple of dollars. Then, take a taxi or Uber to Mixquic. That’s about $4-5.

That will be easy.

But see below for how to get home with Uber, because it’s not that simple!

Bus from Mexico City to Mixquic

This option is a little more complicated. We did not take a bus, so I just went out of the web and did a little research for you. What I found was this comment on TripAdvisor:

…the easiest way to get to Mixquic from the center of Mexico City is to take a combi or small bus from outside the TAPO bus terminal (not inside the terminal, but in a staging area outside the terminal, adjacent to the terminal) to Chalco, and from the center of Chalco, a combi (VW van or something similar) to Mixquic. Travel time is likely to be 1.5 to 2 hours in total – depending on any congestion and/or roadwork under way.

Again, we didn’t get to know much about the bus system, but this information seems correct.

Arrange a tour to Mixquic: Of course, you can avoid the hassle of planning all of this yourself by arranging a tour to get you there and back. Like this Mixquic Day of the Dead tour (that is likely to sell out).

The Day of the Dead in Mixquic

The Day of the Dead – or Dia de Muertos – is the most important celebration in San Andres Mixquic. The final preparations for the big day begin in October, but can take up to three months.

Since the goal is to make departed family and friends feel welcomed back to the community, everything undergoes a thorough cleaning – houses, stores, streets, graveyards, and more.

They even paint homes and other buildings, if necessary.

There are actually two days of the dead – well, sort of. On November 1, children are welcomed back into homes. November 2 is the night for adults to come home.

I said when I arrived that if I could open a flower shop for just one day anywhere in the world, it would be here. Graves that just a few days before looked like normal plots in a graveyard are meticulously transformed into some of the most colorful sights you’ll ever see.

And marigolds in Mixquic are everywhere. A sort of “official flower” of the Day of the Dead in Mixquic and everywhere, marigold petals line the tops of graves as well as mark trails that lead to the homes of families.

But it’s not just marigolds. Every flower imaginable transforms the look of the village.

Thousands and thousands of family members work diligently, picking the petals off of flowers and using them to paint the canvas that is the final resting place of their ancestor.

Food at the Day of the Dead in Mixquic

Food is a major part of the Day of the Dead celebrations, and you won’t have any issues finding authentic Mexican food here. Halef is not even a huge fan of Mexican food – at least the kind we get in America – but he had a field day stuffing himself full of tacos and meat on a stick.

I enjoyed a popular street food of  Mexican Street Corn – often referred to as Elote Corn.

If you’re interested in how to make Mexican Street Corn, it’s simple. Here’s how:

Voila! That simple. And remember – dental floss is your friend…

For dessert, nothing can beat authentic Mexican churros, and we really enjoyed these!

From the time we got to Mixquic to the time we left later at night, there was some sort of entertainment happening on the main stage in the center of town.

The one thing you’ll notice about the Day of the Dead in Mexico is that it’s not a day of mourning exactly. It’s a day of celebration, and the entertainment here reflected this.

While we don’t speak Spanish as well as we’d like, we could tell that the music, speakers, dancers, and actors in Mixquic were having a lot of fun.

The music in Mixquic is everywhere – from the main concert stage to musicians playing in the street.

There is zero opportunity to be bored here.

But even the best of days has to end. And that’s where it got a bit difficult for us…

Getting to Mexico City from Mixquic

This is the tricky part of the logistics of the Day of the Dead in Mixquic, and it’s something that requires planning. Because when you get to Mixquic, you’ll soon realize that those crowds that are so impressive and overwhelming are causing a major problem.

The cellular network will be so congested that you may not even be able to use it.

We traveled to Mizquic in an Uber. It was easy to get an Uber in CDMX. That was not the case in San Andres Mixquic. Connectivity there was so bad that we were getting accepted and dropped by Uber drivers regularly.

And the Uber map was jumping all over the place. Just remember, the population of this place is 12,000 normally, and that’s probably what the cellular network can handle.

The population of Mixquic during Dia de Muertos is easily 10 times that and more.

Another thing to keep in mind is that a lot of drivers are not going to want to pick you up unless they are going back to Mexico City anyway. And you can’t blame them. Because of the traffic in Mixquic on Dia de Muertos, it’s going to take a long time to drive to Mexico City from Mixquic.

Just getting out of the town is crazy. And no driver will want to do that unless they’re going there anyway.

In the end, it took us over an hour to get an Uber. That included getting help from locals to talk to drivers and let them know exactly where we were, and just waiting.

It took about 3 hours to get home.

We assume all of the above applies to taxis as well.

Buses from Mixquic to Mexico City

We didn’t take the bus. We would have if we had to wait much longer for our Uber. There are buses that run to Mexico City from Mixquic, but we never did find one. And we don’t speak Spanish, which would have made it much easier.

Find a bus that takes you to one of the rail stations.

If you’re staying at a nicer hotel, your concierge may be able to arrange a car to both get you there and take you home. Assume that this will be your most expensive option by far.

But it may also be the least stressful. Even though we are sort of budget travelers, we would have done this if we had known.

As we understand it, your driver will take you to Mixquic. Then, you’ll meet at a prearranged spot later in the evening for the ride home.

This option will limit your schedule, of course. What if you arrange to meet at 9:00 p.m. and something cool starts at that time, like a concert you weren’t expecting?

Just keep that in mind when arranging your trip.

Or, you can save yourself the trouble altogether…

You should stay overnight in Mixquic

Having been through it all, we highly recommend finding somewhere close to Mixquic to stay. Either an Airbnb or a hotel. But there aren’t many to choose from, so plan this well in advance.

If you want to try Airbnb, use our Airbnb referral code and get $40 off your first stay. Otherwise, we recommend finding a place on Booking.com.

Knowing you won’t have to find an Uber, taxi, or a train or bus to get back to Mexico City will take a lot of pressure off of you and you will enjoy the Day of the Dead in Mixquic much more, I promise!

Looking for a cool festival in the summer? We highly recommend buying a ticket to Lisbon, Portugal to attend the Lisbon Sardine Festival 2020 – the Feast of Saint Anthony.

American Express Centurion Lounge in Miami Airport – Review
Next Post: Indonesian Restaurants in Atlanta – Where to Get The Best Indo Food