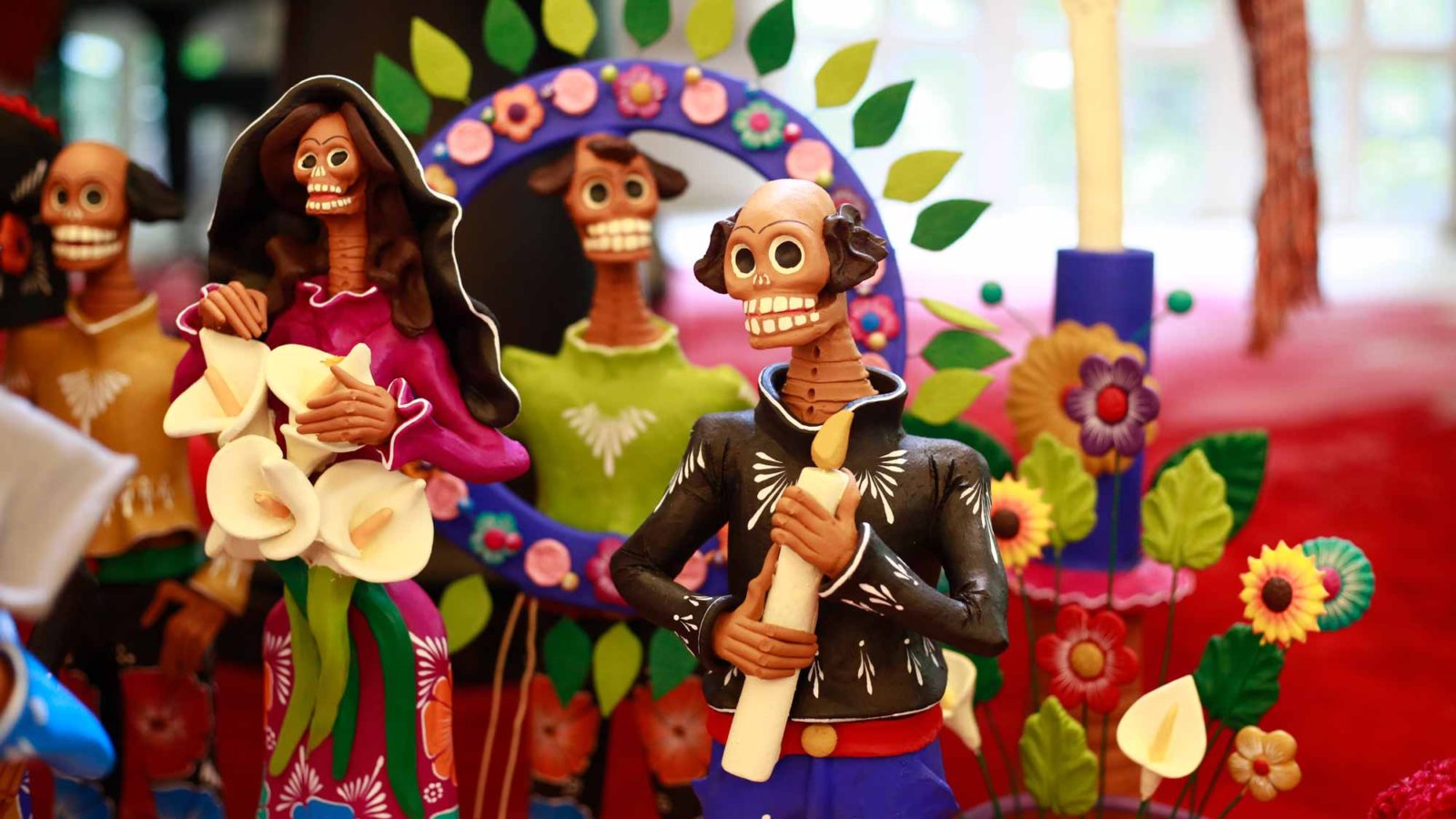 Day of the Dead Altars in Mexico City: The Best Ofrendas in CDMX

What is a Day of the Dead Ofrenda?

Prior to the arrival of the Europeans, Aztecs observed funeral rituals by leaving everyday objects with the departed. These items would help them to navigate the afterlife.

When this practice was prohibited by Catholic rules during the Spanish occupation, the Aztec tradition was integrated with the Catholic ritual Day of the Saints on November 1st.

The Day of the Dead is such a unique tradition that, in 2008, the tradition was inscribed in the Representative List of the Intangible Cultural Heritage of Humanity by UNESCO.

Some may think that this is a morbid thing to observe. But in Mexico, it is actually considered as a celebration and a reunion of the departed and their families.

Ofrenda is a Spanish word for “offering.” In the Dia de los Muertos Ofrenda context, it refers to the Altar of the Day of the Dead. These altars are a metaphor for life itself.

They believe that during the Day of the Dead, departed loved ones come to visit their living relatives. The ofrenda altars help the dead to observe, smell and taste.

You will find these altars everywhere in Mexico, and it is a very important element of the celebration. Often, they take a lot of time and planning to build.

Many of these altars are worth checking out during your visit to Mexico City for the Day of the Dead celebration.

How to Make a Day of the Dead altar

Here are some of the common elements you’ll find on a Day of the Dead ofrenda altars:

Where to see Day of the Dead Ofrendas in Mexico City?

Here are some of the most beautiful Day of the Dead Altars in Mexico City. We highly recommend that you check them out as you attend the celebration:

Mexico City Zócalo, officially named Plaza de la Constitución, is the main plaza of Mexico City. Naturally, this is where you can find the grand display of the Day of the Dead decorations.

The ofrendas at Zócalo are not the traditional altars. Instead, many artists showcase their creative designs and interpretations of the Day of the Dead.

Attendees dress up in elaborate costumes for the occasion. Although there are people who wear things more associated with Halloween costumes, plenty of Dia de Muertos-themed makeup and wardrobes can be easily spotted among the crowds.

You won’t want to miss this imposing, massive structure next to Zocalo. Cathedral Metropolitana is Mexico City’s main church. During the Day of the Dead celebration, the Cathedral arranges several important ofrendas for visitors to see.

Inside the cathedral, you can find a Day of the Dead altar to honor the beloved late Pope John Paul II.

And yes, just in case you are wondering – the Day of the Dead honors all departed loved ones, including non-Mexicans souls (and also some animals).

During our visit to the Mexico City Metropolitan Cathedral, there was an ofrenda erected outside, dedicated to migrants who lost their lives in search of better opportunities in the United States.

It was a humble, and moving altar.

While you are in the area, you can also visit the Templo Mayor archaeological site next to the Cathedral. There, you’ll find several colorful altars that are erected for tourists.

In the past, there were ofrendas with skull towers and skull racks. This is what Templo Mayor is known for.

Day of the Dead at Plaza de Santo Domingo

Each year, Plaza de Santo Domingo in Central Mexico City is the place to find the “Megaofrenda” of UNAM.

The UNAM (National Autonomous University of Mexico) organizes themed displays to honor the dead. Each UNAM faculty builds a display.

Admission is free, and the altar is open from 9 am to 9 pm.

La Pastelería Ideal, or the Ideal Bakery, was established in the late 1920s to quickly become one of the favorite bakeries in Mexico City. Not too far from Zocalo, Pasteleria la Ideal occupies a historic hacienda in central Mexico City.

You can find an elaborate Day of the Dead altar at the back of the bakery, covered in marigold petals and other decorations.

Many establishments and businesses, including Mexico City hotels, create their own versions of Day of the Dead decorations. These can be very elaborate and worth your time to check out.

One place that does an exceptional job is the Four Seasons Hotel, not too far from Chapultepec Park.

Focusing on local artisans to build their annual ofrendas, Four Seasons Mexico City displays a contemporary design with colorful ornaments and meticulously-crafted statues and other objects.

You can even try Day of the Dead-inspired dishes at Four Seasons’ restaurant, ZANAYA. These dishes include Shrimp Tamal, regional stews, Pan de Muerto, and Mezcal.

If you are looking for one of the most creative, well-thought-out, and best-themed ofrendas in town, you will have to check out the Museum of Dolores Olmedo.

Located in Xochimilco on the outskirts of Mexico City, Dolores Olmedo Museum sits on the 17th century Hacienda la Noria.

The Museum offers one of the best-themed ofrendas in Mexico City. In 2018, their ofrendas were dedicated to the legacy of the Ancestral Civilizations, such as China, Mesopotamia, Egypt, Vikings, and the Maya people.

It is one of the most unique ofrendas in Mexico City.

General admission is 100 pesos, with a reduced price for students of 25 pesos. Beware of long lines, here. Every year, Dolores Olmedo’s ofrendas are highly-anticipated and the museum is a popular destination for locals and tourists.

Frida Kahlo and her husband Diego Rivera are perhaps the most popular figures to be honored by ofrendas. You can find many ofrendas dedicated to Frida Kahlo throughout Mexico City.

If you would like to view an ofrenda dedicated to Frida Kahlo, add the Blue House – Frida Kahlo Museum – to your must-visit places in Mexico City for Day of the Dead celebrations.

The Blue House (Casa Azul) receives flower arrangements and many other tributes to Frida Kahlo from all over Mexico. These are on display with the Frida Kahlo ofrendas, alongside her dresses, rebozos, and jewelry.

Although it is neither elaborate nor extravagant, this humble Dia de Muertos ofrenda at Chapultepec Park packs a very meaningful display.

The Montezuma Zoo ofrenda honors the endemic fauna of Mexico. Its goal is also to raise awareness of the preservation of endangered species.

While technically not in Mexico City, Mixquic is one of the small towns outside Mexico City that is famous for its Day of the Dead Celebration.

This is where you’ll see a Day of the Dead celebration that really reminds you of Pixar’s animated movie, Coco!

Celebrating the Day of the Dead in Mixquic is simply magical. It’s is during this time of year that, ironically, Mixquic comes to life. Locals flock to the main cemetery to decorate the graves of their loved ones. A huge festival with food vendors and other activities surrounds the entire town.

The Dia de los Muertos in Mixquic is the town’s largest celebration and attracts thousands and thousands of locals and international visitors.

Here’s what it’s like in Mixquic during the Day of the Dead.

You’ll find ofrendas everywhere in San Andres Mixquic. In some of Mixquic’s alleys, marigolds line the streets and some residents open up their homes to display personalized ofrendas and will gladly talk to you.

You will need to plan ahead if you are planning on visiting San Andrés Mixquic during the Day of the Dead.

See the Day of the Dead in Mexico City

If Mexico is on your travel radar, it’s a wonderful place to visit – especially if you’re traveling on a budget. We recommend going for the Day of the Dead celebrations.

21 Traditional Japanese Dishes – Authentic Food To Try In Japan
Next Post: How to Get From Guatemala City to Antigua Safely and Comfortably