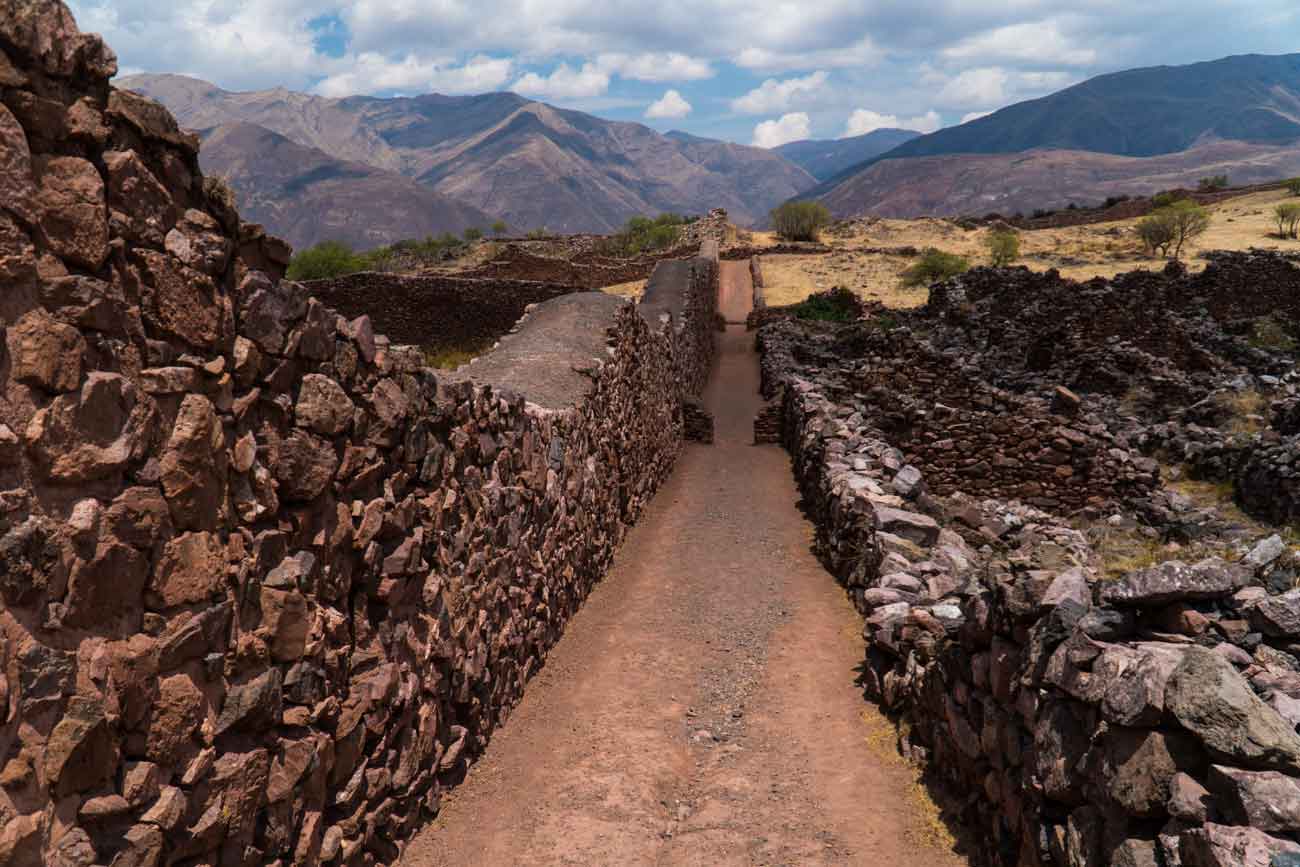 People interested in seeing an ancient civilization usually come to Peru for one reason – Incas. Cusco, Peru is the ancient capital of the Inca empire and scores of travelers visit here every year to use the city as a home base for places like Machu Picchu and other Inca ruins. A day trip to Pikillacta probably isn’t even on most people’s radar.

But what if you’re “Inca-d out”? Perhaps you want to expand your horizons and see something different. If that sounds like you, head to Pikillacta and see the ancient ruins of a Wari town.

This posts may contain affiliate links to products, tours, or accommodations. We may receive a commission for purchases made through these links, at no additional costs to you.

A brief introduction to Pikillacta

When most people think of ancient civilizations in the Western Hemisphere, they usually think of mesoamerican groups like the Aztecs and Mayans along with those further south like the Incas. But they are all pre-dated by even earlier cultures.

The Wari people lived in Peru and their civilization was quite prominent there for 600 years from approximately 400 to 1000 AD. Inca civilization didn’t even show up until around the 1300s.

The Wari people built Pikillacta and occupied it from about 550 to 1100 AD. There is evidence that the site was incomplete when the Wari left. Some suggest that the site was home to large ceremonial feasts on the patios that feature prominently in the center of the village.

What’s in a name?

No one really knows the origins of the name “Pikillacta.” The original name is, so far, lost to the ages, but in the Quechua language Piki means “flea” and llacta which means “city.” Some people think “Flea City” refers to Pikillacta being an inferior city. Others believe it has to do with a Queen who didn’t like her husband and had him imprisoned in a room full of fleas.

I have another explanation – actual bugs. As you’re walking around Pikillacta, you will notice small black flying insects buzzing around you. They’re super-annoying and sometimes they bite. Not terribly, but enough to get on your nerves.

Getting to Pikillacta and back

Getting to and from Pikillacta isn’t difficult, but it requires a bit more explanation than your average day trip from Cusco. That’s because it’s not as straight-forward. Almost no one visits Pikillacta, so there really isn’t a well-defined bus stop here.

The good news is that, while it may be a little less organized than a normal trip, it’s really not that difficult.

Getting to Pikillacta from Cusco

Because we’ve been there, we want you to trust us on this one. To get to Pikillacta in a colectivo (minivan), go to Avenida de la Cultura and find a colectivo heading to Urcos. The ticket is about S/. 5

If you want to take a larger, more comfortable bus, you’ll find one at Terminal Urubamba for about the same price. Pikillacta is on the way to Urcos.

Tell the driver you want to stop at Pikillacta. Even though it’s only about 20 kilometers from Cusco, the ride can take about an hour. About two-thirds of the way there, you’ll pass the town of Tipon – a good time to remind the driver of your destination, just to be sure.

The van will drop you at one of two locations. Don’t worry about which.

We don’t know why the driver dropped two unsuspecting, obvious foreigners on the side of a highway in what first seemed to be a random place. But he did and it turned out just fine!

There is no bus station or defined bus stop in Pikillacta. So you might be a bit nervous about this. Where do you go to catch a bus back to Cusco? Well, we didn’t know either, so we decided to just go to where we were originally dropped off and wait for a bus to pass.

After a few minutes, we saw a bus heading our way. Before we even had the chance to flag it down, the driver stopped anyway and we got on. It turns out, this is very common. Yes, you can stand on a highway and a bus will just stop and pick you up.

Safety note: Vehicles here drive considerably faster than the posted speed limit. Be aware of the traffic while you’re waiting. Consider finishing your visit to Pikillacta during daylight hours to avoid the highway at night. There’s probably not a danger of crime, but it’s too dark to walk in the area with traffic going so fast.

How to experience Pikillacta

Pikillacta is not a very large site, and if we’re being honest, it’s a bit of a stretch to even call it a day trip. It won’t take you very long to walk through both the museum and the ruins and see everything.

The museum here is very small and the main attraction is a massive skeleton of what looks like an armadillo. It’s actually a glyptodon – a relative of the armadillo. It was difficult to get a better photo because the glare on the glass.

You can also see several small stone carvings that were discovered among the ruins.

You’ll need to show the attendant here your Cusco Tourist Ticket before you can enter the museum or park.

Pikillacta is mostly a maze of walls erected by the Wari people over 1,000 years ago. One thing you’ll notice here (or at least I did anyway) is the contrast in the attention to detail between Wari and Inca construction methods.

While the Incas carved each stone to line up perfectly with adjacent stones, the Wari seemed to just pile them on top of each other and fill the gaps with mud.

As you walk the trails, it’s important not to touch the mud between the stones because it will fall out – it’s that fragile. It makes you wonder how much work must go into maintaining this site.

One good rain could take out the whole system of walls!

Cross the street to Rumicola

For a site completely separate from Pikillacta, just walk up the a short distance to a small Inca site called Rumicola. Rumicola is an aqueduct from Wari times that the Inca later took over.

That’s one theory about it. There are several more.

If you came to Peru to see Inca ruins, add Tipon to your list. It’s a unique Inca site that has an intact, working irrigation system. It’s also very underrated. Tipon is only 6 kilometers from Pikillacta, so it’s an easy trip. While more people visit Tipon than Pikillacta, it’s still relatively calm here.

When we were there, we only saw a few dozen people.

While the main grounds are very beautiful, we suggest walking to the top along the path of the irrigation system. Along the way, make the detour to the Pukara – an ancient fortress that protected Tipon.

If you want to extend your day a little, we suggest a side trip to Andahuaylillas. There, you’ll discover a church that’s so beautiful that they call it the Sistine Chapel of Peru. Unfortunately, we never got to see this place, so we can’t talk about it from experience. We’ll see it the next time we’re in Peru.

Take a guided tour: This tour from Get Your Guide offers all three for a very good price. We think you need more time to explore everything, but if you just want the highlights, this is a good tour for that. Keep in mind that you’ll need the Cusco Tourist Ticket for Pikilacta and Tipon. And you’ll have to pay for Andahuaylillas. Neither is included in the price.

Planning a day trip to Pikillacta

Unlike a lot of other day trip destinations in Peru, Pikillacta doesn’t have a tourism infrastructure around it. That means that you’ll be on your own more than you would be if you visited a place like Pisac or Aguas Calientes and Machu Picchu, where there are lots of other tourists, restaurants, coffee shops, and more.

The archaeological park and museum are all that’s there. There’s little else.

How much does it cost?

The full ticket is S/. 130 (S/. 70 for students). However, you can also buy a partial ticket for S/. 70 that includes Pikillacta (and no student discount). To see all the Cusco Tourist Ticket options, click here and find the heading “Partial Ticket Circuit II: City and South Sacred Valley.”

You do not need a ticket to visit Rumicola. It’s completely open and unattended.

How long should you spend in Pikillacta?

Your trip to the Wari ruins at Pikillacta will last only a couple of hours. The museum is quite small, so expect to get through it in less than 30 minutes, if that.

It’ll be 20 to 30 minutes longer if you take the time to walk over to the Rumicola Inca site.

Food and drink at Pikillacta

We suggest eating a good breakfast or lunch in Cusco before heading to Pikillacta for the day. That’s because, except for a vending machine at the Pikillacta museum, there’s nothing else. Bring water and snacks with you.

What are the hours?

Pikillacta Archaeological Park is open every day from 7 am to 4:30 pm.

The Rumicola ruins up the street from Pikillacta are open 24 hours a day and you don’t need a ticket to see them.

What’s the best time of year to visit?

We spent about two months in Peru – from late August to late October. It rained only 2 days on our entire trip (and I think once or twice overnight).

The trade-off to going during this time of year is that it was moderately cold on some days. But this is great if you’re into hiking. The wet season in Peru runs from December to late about April.

If you’re here at that time, prepare for rain in the afternoon.

Pikillacta is just one of the many archaeological sites around Cusco. If you’re looking for more things to do, check these other day trips from Cusco.

Day Trip To Tipon From Cusco – See The Ruins (And Eat Guinea Pig)
Next Post: Going to Machu Picchu? Take a Day Trip To Ollantaytambo On The Way