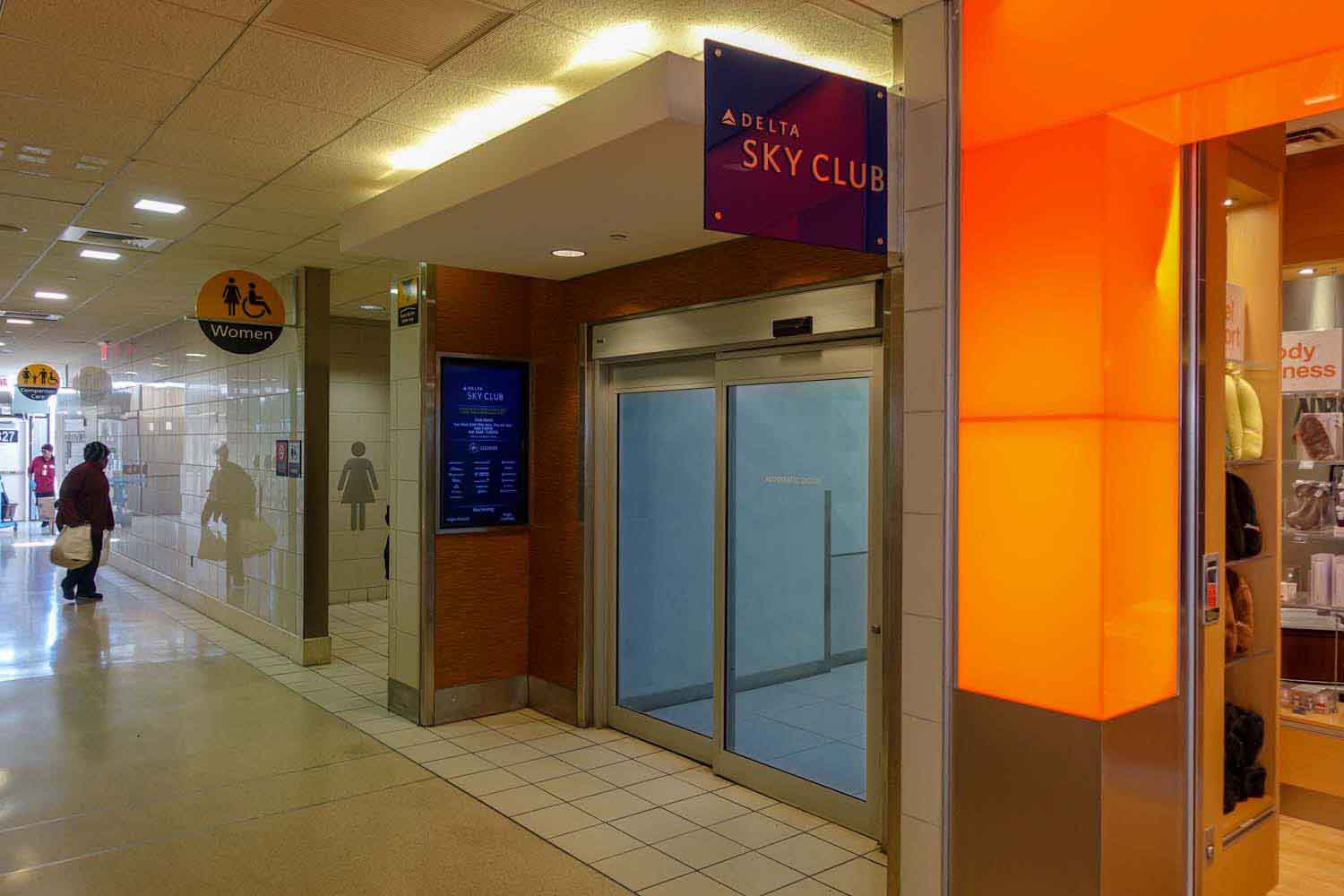 It’s also a hub for Frontier, a low-cost airline, and the place I often look when I am looking for deals to Asia.

I once flew to Jakarta for just $550 from here. Nestled near the entrance to Terminal D is the Delta Sky Club at Philadelphia Airport.

And that’s unfortunate, because I had to stay there for about 9 hours.

I decided to travel with Halef to Philadelphia at the last-minute. But instead of leaving at night, as he did, I opted to leave in the wee hours of the morning and work at the Sky Club all day until he arrived.

I arrived at the Philadelphia Airport Sky Club at around 9 AM on a Friday. It’s airside near the entrance to the D gates, so you have to go through security first.

There are a couple of signs to guide you; however, I did get lost on my second visit.

It’s at the top of the ramp near the Earl of Sandwich.

When I went in, I immediately discovered that it was:

Because I didn’t have the day off, I needed a place to work for the entire day. The work areas here seem very thrown together. That’s not to say that it’s not workable.

It is. You can get your work done here if you just need a place to set up a laptop.

If you need privacy, you won’t get it here. The office area is also where the toaster is, so in the morning, it’s a busy spot. And even if it wasn’t, there’s still no quiet here.

Like all Sky Clubs, the Delta Sky Club at Philadelphia Airport just requires you to show that you have a same-day Delta boarding pass and either a Sky Club membership or complimentary access to Delta Sky Clubs.

The agent will check you in, give you the Wi-Fi password, and reconfirm your departure time and gate.

I use my Delta Reserve American Express Card to get access. All I need to do is scan my electronic boarding pass from the Delta App and I’m in.

Check in was easy and fast, even though there were lots of people there.

There is no time limit on your stay here. While the lounge is wheelchair accessible, maneuvering around might not be so simple when the lounge is crowded.

This is a medium-sized lounge. While it was a little crowded during my visit, it’s not because there was a ton of people. It’s just not that big.

A good addition to this lounge might be the advice of an interior designer. It just looks old. My guess is that it is an old Northwest Airlines lounge. And that’s because it has a self-serve bar.

I have a friend who works for Delta who told me this was common at Northwest Airlines.

Lighting here is nice, but there are no windows. You cannot see outside. When I was there though, it was raining quite heavily and you could hear it against the frosted glass (that should be windows, but they aren’t).

Flight information screens are near the reception desk.

The food was standard Delta Sky Club fare. Since I was there all day, I ate both breakfast and lunch here. Bagels, oatmeal, various breakfast sweets and more were available.

For lunch, there were plenty of options, including a salad bar with plenty of fresh options, plus hot soups and pasta.

It was good. But just good – nothing exceptional. Standard airport lounge stuff.

One of my favorite things about Delta Sky Club lounges is their automatic coffee machines. From lattes to cappuccinos and other specialty coffees, I love getting coffee here.

And if you just want a plain Starbucks coffee, that’s available too.

You never have to worry about coffee and tea at Delta Sky Clubs. It’s always good.

There are lots of cold beverages as well, available as long as the lounge is open. Those include juices, soft drinks, dairy and more.

If you prefer alcohol when you visit, Philadelphia’s Delta Sky Club has you covered with self-serve all around.

The only bad thing about a self-serve beer tap is that people don’t know how to pour it and sometimes take way too long trying to get a beer that’s not all foam.

Tip: To properly pour a draft beer, open the tap for a second and then put your glass under it. You’ll get a perfect pour.

Placing the glass under the tap before opening it means that the high pressure from the initial opening will cause a lot of foam initially.

If you prefer spirits, there are plenty to choose from – vodka, gin, rum, scotch, Bailey’s, and more.

Wi-Fi: It’s free and password-protected. The password is posted around the lounge. I was working here and had no issues transferring large files.

Restrooms: The restrooms are small at the Philadelphia Sky Club, but the staff keeps them very clean (which I’ve always known and appreciated about Delta Sky Clubs)

Showers: They don’t exist here. It’s a small lounge, and there wouldn’t be room for them if they wanted to install them.

Business Facilities: There is an area with cubicles where you can set up and work. It’s not the most comfortable for working, but it’s fine. There is a printer, if you need it.

More Lounges Around The World

Read our reviews of the Minute Suites and the American Express Centurion Lounge at Philadelphia airport.

For More on the United States: When we travel, we use Lonely Planet

Amex Centurion Lounge PHL in Philadelphia International Airport
Next Post: Should You Do A Guided Iran Tour – Only If You Have No Choice