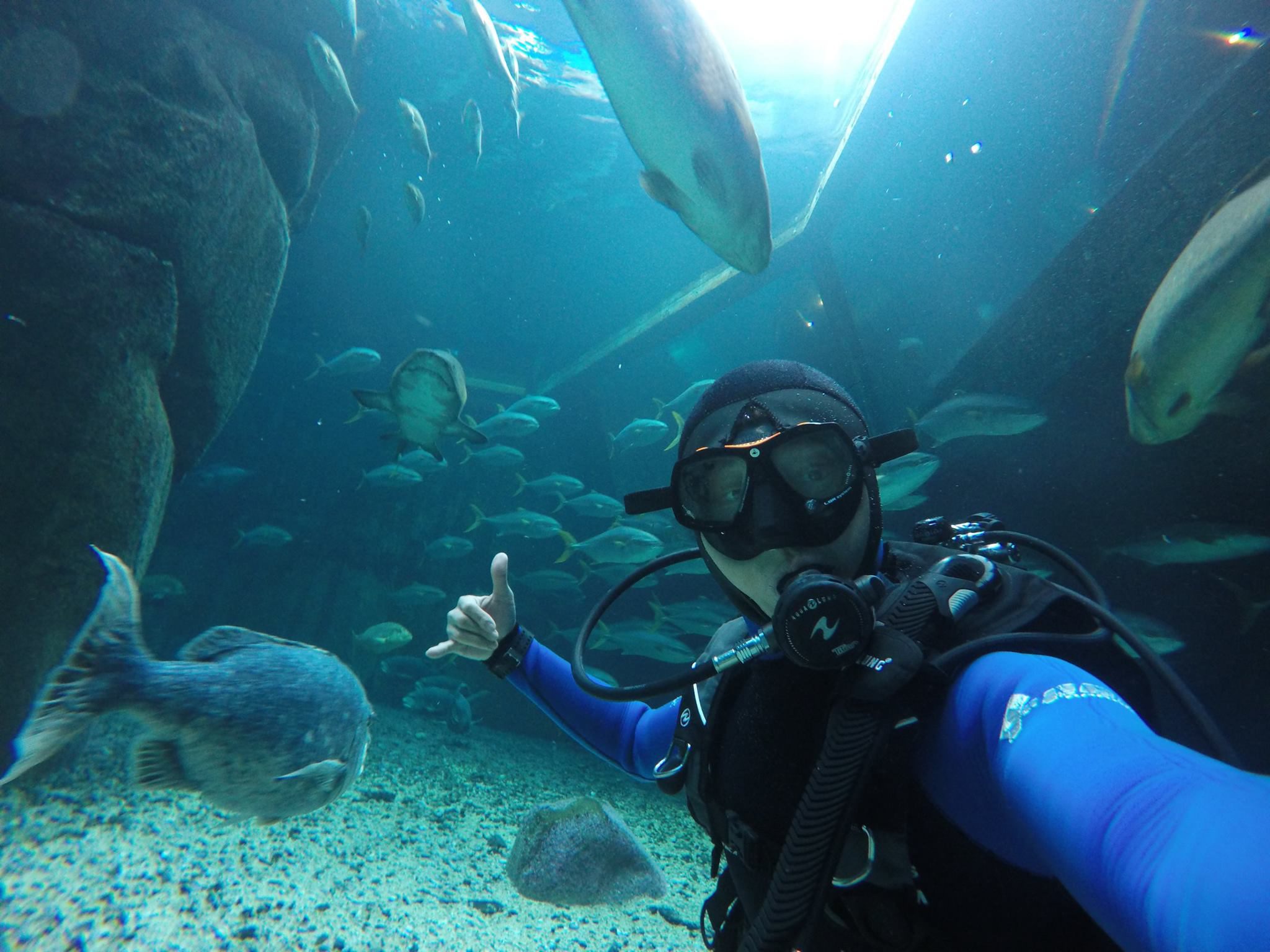 Diving Two Oceans Aquarium in Cape Town is both a literally and figuratively cool experience!

Two Oceans Aquarium in Cape Town is one of the most famous aquariums in the world.

What do they mean by “Two Oceans”?

Well, this is the part of the world where the cold Atlantic Ocean meets the warm Indian Ocean.

And if you’re a scuba diver, you’re lucky because Two Oceans Aquarium will let you come in and dive with sharks and more!

So, if you’re scuba certified, and if you want to get wet, consider signing up to dive in Two Oceans Aquarium.

After diving several aquariums around the world, I had very high expectations for diving at this aquarium in Cape Town.

I was set to do two different dives in two of their famous exhibits: the I&J Predator Exhibit and the Ocean Basket Kelp Forest Exhibit.

My divemaster, Iain, took me to the top of the exhibits on the aquarium’s rooftop and explained our diving plan for the day and what I could expect.

I was the only guest diver during my visit to Two Oceans Aquarium and did two dives that day. There was an hour break in between the dives.

You can learn more about the diving program and book your reservation here.

Diving in Two Oceans Aquarium is cold. You can expect temperatures in the upper 50s (about 10 degrees Celsius).

So if you’re going to dive here, you need to consider whether or not you’re comfortable with this temperature.

I suited up in my 7 mm wetsuit and hood.

The first dive was in the Predator Exhibit. The name might sound a little ominous to some, as this is the home of several ragged-tooth sharks (commonly known as sand tigers).

They look fierce, but they have a very mild temperament regardless the threatening look. Sand tigers are actually quite docile.

Adults can grow to 8 feet in length (3 meters) and about 300 lb (120 kg) with a massive girth. Of course the jagged teeth are what concern people the most.

The aquarium collected the sharks from the nearby bay. They take very good care of them.

Two Oceans Aquarium has a capture and release program. Most of the sharks were injured when they were brought here.

The aquarium tends to their injuries while they are on exhibit.

After what can sometimes be a few years of nurturing and serving as learning ambassadors for we humans, they release the sharks back into the ocean.

There is also a timid sea turtle who lives in the exhibit. We swam around looking for it and eventually found him hiding under a rock.

Our dive lasted for about 50 minutes, at which time we surfaced.

Even though I was still in a very thick wetsuit, I had a hot bath between the dives to warm up anyway. It was cold in there!

UPDATE: This exhibit is no longer open to guest divers at the Aquarium

As its name suggests, this exhibit contains a lot of kelp.

In order to dive this exhibit, you must have at least an Advance Open Water Certification due to the possible entanglement risk. There is also a strong artificial current surge that happens in several spots inside the exhibit.

The kelp in Two Oceans Aquarium is real kelp from the nearby bay. Kelp can grow up to two feet per day. As you might expect, a lot of kelp maintenance needs to occur in the Ocean Basket Kelp Forest exhibit.

Water current is extremely important in a kelp forest environment. The artificial surge was created to accommodate both the kelp and the animals’ needs.

This was one of my favorite aquarium dives to date, simply because I found it very relaxing, albeit quite cold.

During your guest dive at Two Oceans Aquarium, you’ll learn that some of the animals are unique to this location.

They include the Galjoen and the Red Stumpnose fish (who followed me around for the whole dive).

The I & J Ocean Exhibit

While I did not dive in the I & J Ocean exhibit, this is one of the options they offer. In this exhibit, which is also much warmer (!!), you’ll get to see animals like turtles, stingrays and more.

And the cool thing is, you don’t even have to know how to dive. Two Oceans Aquarium offers same-day training for non-divers.

Did you know that Two Oceans Aquarium also offers scuba certifications? They do!

The Open Water Certification course happens over a period of two weeks part time or five days full time, culminating in a dive in the I & J Ocean Exhibit.

I’ve been lucky enough to dive a few of the world’s aquariums, including a few years of volunteering at Georgia Aquarium in Atlanta.

I enjoy the interactions that I have, especially with the aquarium guests.

Kids tend to think that divers are the coolest thing they see inside the exhibits. Many of them took pictures with us.

Other things to do at Two Oceans Aquarium

Not a scuba diver? No problem! Two Oceans Aquarium had other great experiences as well.

Who doesn’t love penguins!? Most people have a good idea about what a penguin looks like. But have you ever seen a northern rockhopper?

All Northern Rockhopper Penguins at Two Oceans Aquarium are rescues.

Two people at a time can join a penguin keeper for a face-to-face encounter with these adorably unique penguins!

In this experience in the I & J Ocean Exhibit, you can get up close with animals like rescued sea turtles.

Using a mask and snorkel, you’ll also get an up close look at short-tail stingrays, guitarfish, and the black musselcracker, a weird fish with a face that looks almost human!

Are you looking for places to visit in South Africa?

Check out this Guide on Scuba Diving in South Africa.

For More on South Africa: When we travel, we use Lonely Planet

Kabuki Theater in Tokyo at the Kabukiza Theater – A Guide
Next Post: 8 Cartagena, Colombia Travel Tips – Plus Things To Do in Cartagena