Exploring Tikal – Highlights and Tips For a Better Jungle Trip 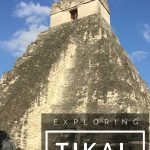 Tikal National Park sits on an area in the middle of the modern-day jungle of El Peten in the Northeast part of Guatemala. It covers roughly 100 square miles.

And although exploring Tikal entirely is not possible, the heart of Tikal National Park is still a huge area to cover.

Less than 20% of Tikal’s estimated 4000 structures have been excavated so far, leaving the vast majority of the ancient structures underneath your feet!

UNESCO has been painstakingly regulating the extent of excavation to protect both of the ruins as well as the rich biodiversity surrounding the area.

Recently, I flew from Atlanta to Belize City and made the journey to Tikal by shuttle bus.

The history of Tikal traces back to the 4th century BC and the Mayan culture. It lasted until the 9th century AD, when the Mayans abandoned the whole area.

A noteworthy expedition, lead by a Swiss explorer in the late 1880s, dismantled one of the intact wood panels from Temple I door and stole it for the Museum of Cultures, Museum der Kulturen Basel.

Excavation of Tikal started in the late 1950s, lead by the University of Pennsylvania Antiquities Department, which developed the foundation study of Tikal’s ancient cultures.

The ancient Mayans built an impressive city that housed some 100,000 inhabitants at its peak, and it was the second largest in Central America.

When you’re exploring Tikal, these are some of the highlights of the National Park that you shouldn’t miss.

Temple I: Temple of the Grand Jaguar

When the first European explorer discovered the site, Temple I was already exposed and was in remarkable condition.

You can see the historical photograph from the explorer’s records at the Monolith Museum’s entrance.

Completed in the year of 734 AD, Temple I is definitely the most recognized iconic structure of Tikal, and it has become a symbol of Guatemala.

Located directly across from Temple I, this structure is as impressive as the Temple of the Grand Jaguar. Even better, you can actually climb it to the top!

Go to the backside of Temple II where a set of wooden stairs wraps around the structure all the way to the top.

Be careful when you’re climbing up or down. This is especially true in the morning or after the rain when the staircase is wet.

There have been times when people slipped and fell from this staircase!

This is my favorite spot in Tikal. Surrounded by two massive temples on each side, a series of impressive structures and a small ball court, the Grand Plaza was the center Mayan civic ceremonial activities back in the 6th century.

The acoustics generated by surrounding buildings are still impressive to experience. From the center of the Grand Plaza, you can clap your hands together and hear the echo as it bounces off the two steep staircases of the temples on each side.

That echo produces the sound of the Quetzal, Guatemalan’s national bird.

It is a rewarding experience to climb the uneven steep stairs to the top of the Northern Acropolis and to look over the Grand Plaza with the two major temples on each side of the Acropolis.

I liked the Mundo Perdido, the Lost World complex, because it is one of the most remote parts of Tikal, with the majority of the structures still covered by mounds of dirt and vegetation.

The complex construction spans different eras of the Mayan timeline, starting from the Pre until the Classic periods.

Without a doubt, the top of Temple IV is the best place to look out over Tikal’s other monuments and the thick jungle underneath. Temple IV is the highest structure in both Tikal and the whole of Mesoamerica.

It is the place to view the sunset and sunrise over the national park.

A set of wooden stairs brings you to the top platform of the Temple where you can enjoy the view.

If you’re a Star Wars fan, you’ll really appreciate the view, as this was the filming location of Yavin 4 in Star Wars – Episode IV: A New Hope.

I had to explain to my tour guide about the Millennium Falcon.

For the first time in my life, I felt like I knew more about Star Wars than anybody else.

One of the major structure in Tikal, it is impressive to view and sits slightly higher than the Grand Plaza.

Tikal National Park has two tiny museums that you can visit: the Ceramic Museum and the Monolith Museum. Your admission ticket does not include these museums; however, you can purchase tickets for both for 30 quetzals.

These museums are at the main entrance. Photos are not allowed inside.

Here are a few things to know before you explore Tikal National Park.

Make sure you have plenty of time to wander around and to enjoy the park. Walking between temples takes about 15-20 minutes.

To get to the entrance to Temple IV, one of the farthest points in the park, takes about 40 minutes each way.

You will do a lot of walking and a lot of it will be on uneven surfaces. A typical full day easily covers about 10 km / 6 miles or more.

Make sure that you wear a pair of comfortable walking or hiking shoes.

When to visit Tikal

Try to visit during the non-peak hours to avoid crowds. Typically, tour groups visit from 10 AM-2 PM, so getting to the park when it opens at 6 AM is best.

From the main entrance, go directly to the top of Temple IV to catch the end of the sunrise – it is a rewarding experience.

Remember to bring enough water and small snacks for your visit. Officially, food is not allowed inside the park, but nobody seems to care as long as you don’t litter.

There are rest houses with toilets and attendants selling bottled water, soda, and beer.

But no one sells food.

Unfortunately Tikal is not a good place for people with disabilities. The earthen path is especially not suitable for wheelchairs.

Other things to know

If you join the sunset or sunrise tour, make sure that you bring your flashlight or headlamps, as the thick jungle is pitch dark without the sun in the sky.

I recommend bringing along a pair of binoculars – Tikal is in the middle of thick jungle and there is plenty of wildlife.

It’s a lot of fun to observe these animals more closely using a pair of good binoculars.

It’s impressive to watch them jump from one high branch to the next tree!

While there is a lot of wildlife here, you’ll see signs everywhere warning against feeding animals.

Cute coatis and wild turkeys may approach you, but for their own protection, please do not feed them. Animals need to fend for themselves.

Giving them food can create a dependence on humans, which is detrimental to their health and conservation.

Where to stay in Tikal

Do what I did! I stayed at the Jungle Lodge Hotel and it was great. It’s the closest location to the entrance of the park!

Here’s a guide to Tikal accommodations.

We recently discovered a new transportation service in Guatemala called El C.A. Express. We took their excellent bus from Guatemala City to Antigua. Soon, they’ll be operating more of their environmentally-friendly buses throughout the country. Check them out!

For More on Guatemala: When we travel, we use Lonely Planet

in addition to all of the other research we do. We really do love these books and have a shelf full of them! By clicking the image and buying a book at the Amazon.com link below, we get a small referral fee at no additional cost to you.