How to Be a Good Couchsurfing Guest When You Travel 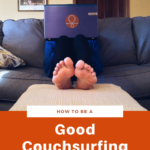 Everyone has their own ideas about Couchsurfing, and there are as many opinions about how to be a good Couchsurfing guest or host as there are hosts and guests.

Everyone has different Couchsurfing experiences. I’ve read posts saying that guests should offer up a few hours of their labor or buy things for their hosts.

Others say that a guest on Couchsurfing is different than a guest anywhere else. Sort of along the lines that nobody should expect anything of a host or guest than offering and/or receiving a clean, safe place to stay and somewhere to clean yourself up.

I fall somewhere in the middle on this.

I think a good Couchsurfing guest is someone who understands that the point of Couchsurfing is not (just) free accommodation. Rather, it is about sharing.

That said, a good Couchsurfing guest should also recognize that she or she is costing a host – in either time or money.

Here’s what I think a good Couchsurfing guest looks like.

Before I go any further, I vehemently disagree with those who tell you that you owe your host something to stay with him or her. Free labor, buying a meal, paying for stuff.

Couchsurfing is not a business transaction. Rather, Couchsurfing experiences should be about sharing. Mowing lawns or fixing cars is not part of the deal.

Sure, be generous and offer to help if you want to. But you are not a cheap skate if you don’t.

That’s not to say there aren’t many ways to give back – and you should – but there is no reason for you to feel obligated to do anything besides be a good Couchsurfing guest, be polite, and represent yourself well while in your host’s home.

Asking for things in exchange is simply not something better Couchsurfing hosts do.

You may find other sites out there that say otherwise. I disagree.

A great Couchsurfing host has a complete profile that spells out what they expect from guests. If that includes labor or helping pay for the heat in the house, then that host has completely missed the point of CS.

Quite frankly, if you cannot host without requiring payment, whether in the form of cash or labor, you should not be hosting. It demeans the spirit of the exchange, in my opinion.

At the time of this writing, we’ve hosted nearly 500 people, so I am probably writing this from the host’s point of view. That said, I’ve surfed quite a bit too.

Here’s what I’ve come to expect from a good Couchsurfing guest:

There is nothing worse than getting a Couch request from someone who hasn’t even read your profile.

Everything a host wants you to know about him or her is right there.

They may even have a question in there that you need to answer to prove you read it. And besides, if you don’t read profiles, you’re just proving that all you care about is a free place to stay.

The other bad thing is to start a request with “Hey Dude!” or worse yet, the wrong name altogether. We’ve put together a guide for how to write effective Couch requests that get accepted.

They have worked for us wherever we go. We’ve surfed in dozens of places all over the world and rarely get turned down.

The most important thing you have to do is be completely honest. You want your host to know a bit about you and what to expect when you arrive. If you’re allergic to cats, say so.

It’s far better to stay with someone who knows this stuff about you than to surprise a host with that information when you get there.

Say what you mean. Mean what you say. Be honest. That’s what being a good Couchsurfing guest all boils down to.

We’ve hosted about 500 people and we’ve stayed with dozens of people all over the world. It’s our own hosting experiences that have taught us how to be a good surfer – and how not to.

In my profile, I write:

I generally don’t host people who don’t host. BUT… I make exceptions for true travelers. If you are one of those, please request. I will know who you are.

If I see a person who has a profile that describes his home, but never hosts anyone and only uses the site for his own accommodation, then I might suspect that person is more of a freeloader than a true Couchsurfer.

Having said that, I also read references, and I know who the “true travelers” are. It’s also good to understand that some people just can’t host. People who live in college dorms, or have roommates who don’t want strangers in their homes.

Some people still live with their parents and can’t host. You know they’d host if they could. So you give them a bit of a pass.

I am far more likely to host you if you host regularly or if I can tell that you take the mission of Couchsurfing seriously.

Schedules change, and good hosts know this and accept it as a common part of travel. But if you say you’re going to show up at 8 PM on Thursday, do everything possible to show up at that time.

Better yet, give your host a window of time (like the cable guy, except you’ll actually try to get there inside that window!)

If you are going to be late, let your hosts know immediately. They may have commitments they have to keep. We always ask our guests two questions:

This way we have an idea about their schedule. We also know that when they say they are coming into Atlanta airport and they’ll be here an hour after that, it might not happen.

Especially if they are traveling internationally. Customs and immigration can take a while sometimes, and often the trains are delayed.

Leave when you say you are going to leave. You might be a ton of fun, but no one likes people who overstay their welcome.

That said, it’s quite OK to ask your host well in advance if it would be OK if you stayed another night. I don’t mind guests asking this at all and will often have no problem with it if we got along.

Don’t count on it though.

A lot of hosts do so regularly and may have guests coming that same day – or might want a break between surfers.

What about giving gifts?

Some people say yes. Others say no. Again, I fall somewhere in the middle. Personally, I don’t want people to bring me trinkets – key chains, fridge magnets, shot glasses, etc.

I have nowhere to put them, so I hang onto them for an appropriate amount of time and then I ditch them. I hate to say that, but I do.

However, if a guest brings something we can use immediately, then that’s something I’m down for. If someone from Belgium brings me a good beer, that’s awesome!

If someone from another country cooks a vegetarian meal that we can all share, yum! Those things are appreciated.

I don’t think any of this is mandatory though. I would rather sit at night and share travel stories over a beer with Couchsurfers than accept their gifts.

That said, a good Couchsurfing guest should offer something. Otherwise, why would you want to host?

Read the host’s profile. Find out what they like and don’t like. Then do it or don’t do it.

It’s really as simple as that, honestly.

Etiquette in the home

It’s important to remember that your host opened up his or her home to you and, as such, you should treat their place with respect. For me, this usually involves doing what the host does or asking if you’re not sure.

Can you wear your shoes in the house if they’re reasonably clean? In my house, you can. But many hosts don’t like this.

Again, it all comes down to reading your host’s profile and communicating with them.

A good Couchsurfing guest DOES:

A good Couchsurfing guest DOES NOT:

A lot of times, what clean means comes down to cultural differences. Personally, I normally shower, wear deodorant, and put on new clothing  every day. That is not the case all over the world.

It reminds me of a conversation I had with a forensic anthropologist friend back in college. She told me that Canadians and Americans bathe far too much.

It was, she said, part of the reason westerners are so susceptible to disease.

The more we clean ourselves, the more we have to!

She was probably right. But we are the people we are. If you’re not particularly concerned with having a bit of body odor, you might want to reconsider that for the trip you’re taking to America.

Conversely, if you’re a westerner traveling to a place where there is a different standard of cleanliness, you need to consider that as well.

I think the goal should be to be appropriately clean – and that depends on where you are.

We’d really love to hear your thoughts on this in the comments, by the way. If you’ve experienced something unusual, or if you had to adapt.

No calling out people or cultures specifically if you’re saying something bad, ok?

Remember, you are a guest

You may very well end up as friends with your Couchsurfing host. Some of our best friends are people who stayed with us at one point or another. But don’t do anything you wouldn’t do if you were a guest in anyone’s home.

And because this is a stranger’s home, you need to think about it even more carefully. That said, Couchsurfing hosts are not generally authoritarian.

Many will give their Couchsurfing guest a key to the house and tell them to do whatever they want. That’s us, usually. But just don’t assume that!

Couchsurfing creates lasting experiences and friendships for both hosts and guests. But as in any aspect of your life, it takes mutual respect.

You may end up partying your butt off with your host at the clubs all night. Or you may sit and share stories with a host at her home over wine.

Whatever you end up doing, just be sure it was something that the host expected of you.

That’s how to be a good Couchsurfing guest!

We don’t claim to know everything guys! If you have other ideas about how to be a good Couchfurfing guest, we’d love to hear them.

BAPS Hindu Mandir is a Must Visit Destination in Atlanta, Georgia
Next Post: Baroque Hostel Budapest – A Rustic Hostel Near the Szechenyi Baths