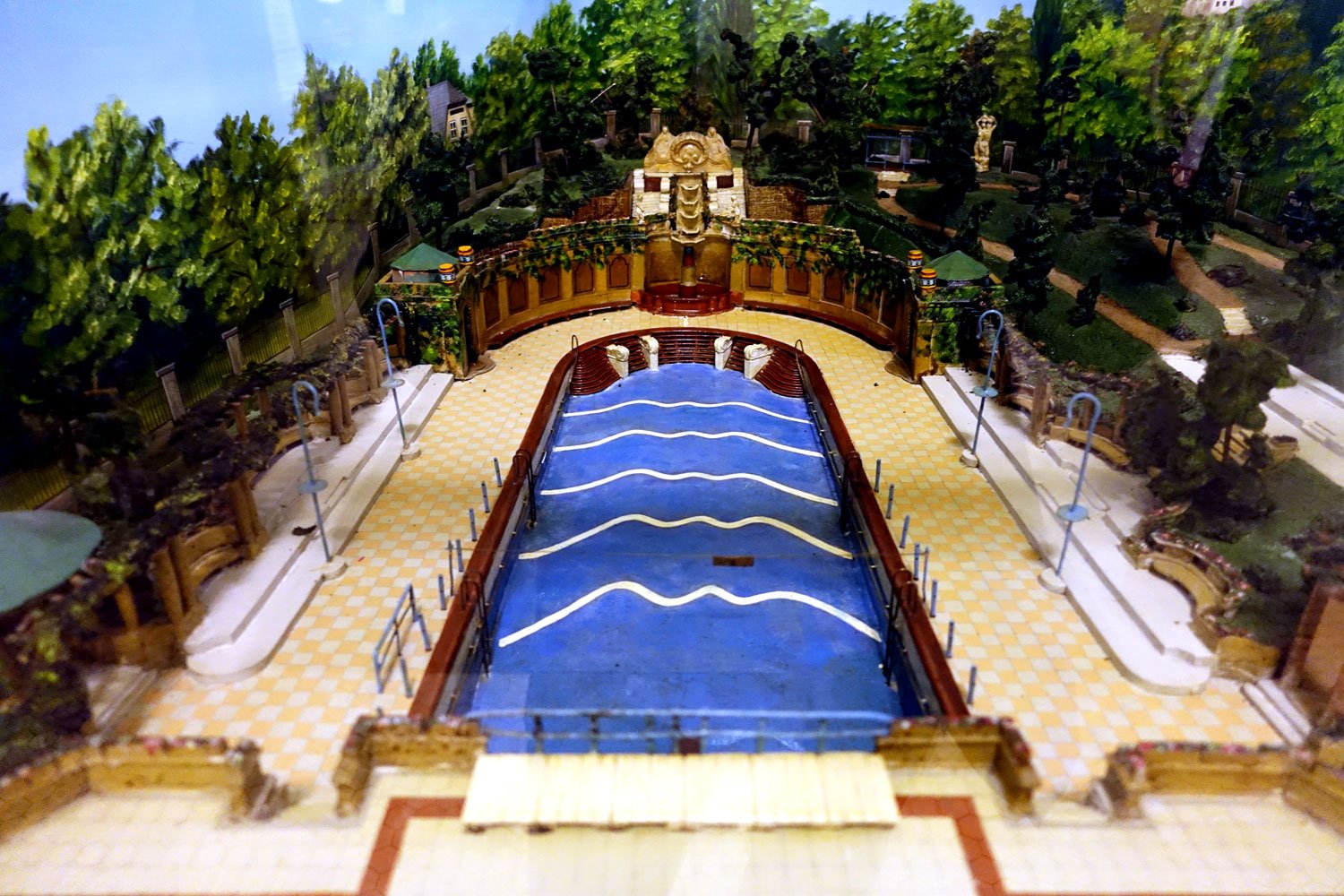 A Complete Guide to the Budapest Thermal Baths

There are only a few major cities in the world whose unique culture is heavily based on bathing and swimming and Budapest is one of them.

The Hungarian capital’s love affair with medicinal water and therapeutic spas originated with the ancient Celts and Romans.

Even during both world wars and the Soviet occupation, Budapest never abandoned its thermal spas.

A few permanent Budapest Thermal Baths have been built in the last century. Most of them are still operating today.

Budapest is made up of two separate parts. Buda and, you guessed it, Pest.

Buda is the hilly side, west of the Danube River banks. Underneath this part of town, there are roughly 1,000 natural hot springs to feed each of the baths (along with some cool cave scuba diving!).

Here are some highlights of Budapest Thermal Baths.

The Széchenyi Baths are, by far, the largest and the most visited of the Budapest thermal baths. A visit to Budapest is not complete without a visit to this Budapest landmark.

The Széchenyi complex consists of 18 pools with varying degrees of heat. Three of the pools are located outdoors, 15 are indoor pools. Ten different sauna and steam rooms complete the complex.

Each is located in the basement of the complex. You will need a Széchenyi Baths map to navigate the place.

Strangely enough, this is one of the newest bath houses in Budapest. Built in 1913 and renovated in 1927, its neo-Baroque style brings a romantic aspect to the visit.

Explore all the areas in Széchenyi Spas.

There is a huge range of spas and wellness facilities, including fish pedicures, weight-baths, a medicinal pool, and saunas.

One of the Széchenyi pool traditions is to join the locals to play chess. They will be glad to try and beat you, unless you’re a world champion, of course.

When I visited the Széchenyi Baths, I learned that their hot water also feeds the nearby Budapest Zoo & Botanical Garden, one of the oldest animal institutions in Europe.

In winter, the heat helps to warm the animals houses, and feeds into the hippopotamus pond and other habitats.

If you have the opportunity, the Széchenyi thermal bath party (known as Szecska party) is something I recommended. This legendary Budapest party happens every Saturday.

You can read about it here – SPArty, the epic Budapest Pool Party.

The Veli Bej (Császár) Baths are one of Budapest’s oldest Turkish-style baths and were just recently renovated. They are located at the Hotel Csaszar Budapest, not far from St. Luke’s Thermal Baths.

This is a great Budapest Spa hotel option if you are looking for one.

The history of the Veli Bej baths can be traced to the mid-1500s, when the Turkish Empire built their style of baths into the newly-annexed city.

These are the only Budapest thermal baths not managed by Budapest Gyógyfürdői és Hévizei Ltd – the city government’s official Budapest Spas and Hot Springs Company.

It has 8 pools of different temperatures, and there are clear instructions for suggested times to spend in each pool.

The Gellért Baths (Gellért fürdő) complex is part of the Danubius Hotel Gellért Budapest, a landmark of Buda. The complex was built in the mid- and late-1910s in the Art-Nouveau style.

They were partly destroyed during the Second World War. Gellért Spas and Baths used to be gender-separated, but they have been integrated since 2013.

Back in the 1920s, Danubius Hotel Budapest and the Gellért pools were popular with the rich and famous, who were eager to discover Gellért’s innovative wave pools, saltwater pools, and mud treatments.

Today, it is still popular with the elite for their Budapest bathing experience. Some of the famous people who’ve visited include world leaders like President Nixon and celebrity chefs like Anthony Bourdain.

All can be purchased separately and are not included in the basic admission ticket.

You can find elaborate mosaic designs throughout the structure, as well as finely crafted statues and nice architectural details.

Dandár Baths, (DandárGyógyfürdő) is often overlooked and forgotten, but many agree that it is one of the hidden gems of Budapest.

While other big name Budapest spas and pools are more popular than Dandár Baths, its clean Art Deco architecture style is unique amongst them.

Although it is one of the smallest of the Budapest thermal baths, the location in the city center is always a good selling point for a Budapest attraction.

In fact, Dandár Baths complex is so small – three indoor and two outdoor pools, that locals love it because it feels homey. It’s just like sitting in a hot tub in your backyard.

There is a small and laid back cafe that allows food and beverages to be brought out to the pool side.

It typically doesn’t get crowded, and there’s always room for everybody here.

The history of the Lukács Baths (Szt. Lukács gyógyfürdő) originates the 12th century Buda, where monastery baths were established in this very location.

The first commercialized baths were built in the 1880s and a daytime hospital complex was added in the late 1970s.

Don’t miss the testaments from cured patients who donated a series of stone plaques that are proudly displayed along one of the exterior walls of the spa.

Although it only has three thermal pools, Lukács Spas is one of the most popular baths in Budapest.

As in many other Budapest’s Baths, you can get massages and spa treatments for an additional fee.

Due to pool size limitation, each week’s SPArty in Lukács pool can only accommodate a maximum of 500 people.

Located not too far from the Buda Castle, Király Baths history can be traced back to the Ottoman occupation in Budapest.

These baths share the same water source as the nearby Lukács Baths.

The highlight here is the steam pool, which is a dark and relaxing place to bathe. An ancient dome with holes that allow sunlight is located above the pool, giving it its own character and personality.

It’s like a scene out of Game of Thrones scenes!

Don’t miss the rustic but calming garden surrounding the bath structures, as well as the outdoor hot pool.

Rudas (Rudas fürdő) is one of the oldest thermal baths in Budapest. Their oldest compound in the complex can be traced back to the mid-1500s.

Check out its octagonal pool, located under the huge dome.

In 2014, the baths received a much-needed facelift. Half of the complex is now considered a modern, state-of-the-art spa facility.

Don’t miss the famous panorama pool on the terrace. It offers a dramatic view of the Danube River and the Budapest city center skyline.

You access this scenic pool through the popular Turkish-Hungarian restaurant and bar.

The Rudas Baths are open slightly longer on Fridays and Saturdays. This allows bathers to sip on their glasses of champagne while enjoying the view of Budapest.

If you’d rather drink the healing water from the three springs, you can do so in the drinking hall. Rudas Baths also offers a therapeutic swimming facility and different types of saunas and pools.

Important Note: Check their schedule, as they only allow certain genders on certain days. At the time of writing, Rudas Baths is only open to women bathers on Tuesdays and to men all other weekdays.

Both can visit on weekends. However, the swimming pool is opens for both everyday.

Throughout Budapest, there are several places where you can find remnants of abandoned structures that once housed elegant thermal baths. A perfect example of this is at the entrance of the Molnár János Cave.

This is a protected underground cave system that is also the starting point for the one of the most unusual scuba diving experiences.

Located across from the Lukács Baths, the Turkish-inspired bath construction started in the mid 1890s to replace the ruins of Barut degirmene – a Turkish powder mill.

Throughout the years, the spa operation was neglected, and the structure was repurposed for several other functions and now is completely abandoned.

Next to the structure is a pond with lilies and duckweed, where the hot water was collected from the underground source for the mill operation.

It is located on private property and not open for public to access. You can still see it through the gate gap and glass fence. Access is strictly enforced and limited to just a few people.

One way to gain access, if you’re scuba certified, is by doing the Molnár János Cave Diving. This allows you to get inside the compound where an extensive scuba diving shop is located.

Keep in mind that nobody can get inside this structure, since it has been condemned by the City of Budapest as structurally unsafe.

However, you can still peek inside to see the remnants of the pool, complete with the oversized dome with holes where sunlight can penetrate through.

Consider of purchasing the Budapest Card for your visit. It is a great tool to save money if it fits your itinerary and budget. Some things to do in Budapest are included in this city pass, including the Budapest airport public transportation.

It also gives you free access or discounted admission to some of the Budapest thermal baths.

If you are wondering where to stay in Budapest, you need to check out booking.com to view your options.

Booking.com
For More on Hungary and Budapest: When we travel, we use Lonely Planet

The 17 Best Things To Do in Fredericton, New Brunswick
Next Post: Is Airport Lounge Access Worth The Cost of a Priority Pass or Credit Card?