Iran 9-Day Itinerary – Tehran to Shiraz on a Guided Tour 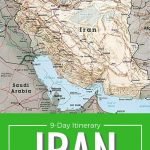 I’d been planning my Iran trip since May of 2016 when I found a super cheap ticket from Atlanta. I couldn’t believe it when the deal came through from Qatar Airways – just $571, including all taxes and fees, round-trip from Atlanta.

It’s a long flight, but I had a stop-over in Doha Qatar before making the 2 hour flight to Tehran.

I thought I would take a moment to tell you why I went and to share my Iran 9-day itinerary.

Why am went to Iran?

A lot of people ask me this, and I completely understand it. Iran is part of the so-called “Axis of Evil,” after all. It’s even featured in a Lonely Planet book called “Badlands.”

Every day, we hear something about why Iran is so dangerous. But if you look behind the hyperbole, Iran is considered a safe country. Yes, it is a theocracy and has very strict rules, but I don’t consider it any more dangerous than spending 10 days in New York City.

We all feel better in our comfort zones. But sometimes, you have to get out of that zone and experience something that challenges you.

Fact is, there is no one who is truly familiar with Iran who considers it dangerous to visit.

Just follow the rules and you will be fine.

The people there reject terrorism on the whole. In fact, they are some of the friendliest people on the planet. Persians, along with their Arab neighbors, consider taking care of strangers and visitors the rule – not the exception.

Why would anyone be frightened of people like this? Well, our news media is culpable. You rarely see news stories on TV about the tremendous people of Iran because it doesn’t fit the narrative.

Rick Steves, the highly rated U.S. travel host, was even nervous about going. Until he did. You should watch his Iran special and read about it.

I refuse to limit my travels. If I only listened to governments and others with agendas, I would never have traveled to Indonesia, Jordan, Vietnam, Cambodia, Laos – I’d be sitting in a chair at home, watching FoxNews, and melting into a puddle of goo.

Do the thing you fear most and the death of fear is certain.

Until people broaden their horizons and start learning about the people they condemn, they should stop telling the rest of us where we should and shouldn’t go.

So, back to the post! Here’s what I did during my guided Iran tour on my 9-day itinerary:

Day 1: Arrival in Tehran. I did a city tour of Iran’s capital and visited Azadi tower and the Grand bazaar. I was pretty tired after the flight, so that was a short day.

Day 2: A full-day tour of Tehran, including Golestan palace and the National and Jewelry Museums. Fly to Shiraz

Day 3: I did a full-day city tour of Shiraz, including the Nasirolmolk mosque and Zand Complex. After that, we visited shahcheragh and see its magnificent mirror works and Aliebne hamze with its huge dome.

Day 4: Excursion to Marvdasht to see Persepolis and Necropolis. After that, back to Shiraz and visit the Quran gate. We visited the Hafez and Saadi temples, too.

Day 5: Drove to Yazd. En-route, visited Pasargadae, the great city of the Achaemenid Empire. When we arrived in Yazd, we visited Amir Chakhmaq square.

Dowlat Abad Garden and Zoorkhaneh, the place for Iranian sport, was also included.

Day 7: Left Yazd for Isfahan. Isfahan is what I most looked forward to on this trip. Naghsh-e Jahan Square is a UNESCO World Heritage Site and an outstanding example of Iranian and Islamic architecture.

Our tour included the Naghsh-e-Jahan Complex and Chehel sotoun palace. The food here was amazing!

Day 8: Visited Vank cathedral in Julfa. We also saw the Jame mosque and the Armenian quarter. After that, we drove to the Abyaneh village where people still live the way they did 2500 years ago.

Day 9: After breakfast, drove into Kashan. This old Iranian city has lots of historical sites, like Tabatabaie and Borojerdi House and Fin Garden. Kashan is one of the oldest cities in western Iran.

Its unique houses are famous. Here, they also manufacture carpets, silk and other textiles.

Finally, and sadly, my Iran 9-day itinerary ended and we drove to the airport for my departure flight.

My trip included a couple of stop-overs in Doha, Qatar. And, as luck would have it, Qatar Airways offered transiting visitors a free city tour that included a complementary visa.

So in addition to my Iran trip, I got to see part of an entirely different country.

The downside: It’s too short

An Iran 9-day itinerary is better than no time there at all, but I feel as though the trip should have been longer. Of course, with “longer” comes more expensive, and this trip was such a great deal that I bought it knowing it wouldn’t cost much.

My entire trip – including flights, tours, entrance fees, many meals, and internal transportation, cost exactly $2,000. So that’s not bad, considering it will be both a trip of a lifetime and an education.

I’m not much for souvenirs, so a few fridge magnets will do.

It was such an exciting trip. Naysayers aside, I believe everyone should get out of their comfort zones and see the places others won’t go.

Check out this post by Matthew Karsten, who recently got back from his trip to the middle of Afghanistan, for example.

Not all places are safe, of course. There are places you just shouldn’t go, right now anyway.  But Iran isn’t one of the places you need to fear – no matter what the media and uninformed people want you to believe.

It’s a place with incredible food, architecture that is unmatched, and some of the friendliest people you’ll ever meet.

My goal, in the beginning, was just to go on a cheap trip to a very different place. But the reaction to it has made me think that a better goal was to show others that there is nothing to be afraid of.

I hope I did that!

Want to go to Iran? Here’s how to get an Iranian visa.

Here are some things you need to know before you go to Iran.

I’ve created a section of this blog for Americans and Canadians who want to visit Iran.

For More on Iran: When we travel, we use Lonely Planet