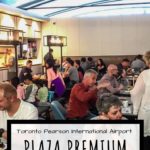 Toronto’s Pearson International Airport is Canada’s busiest. And on the particular Saturday I was there, it was busier than ever – making my visit to the Plaza Premium International T1 lounge a little bit, well, not so much fun.

There were just so many people. In fact, I left after only a brief stay.

I wandered around the airport for a couple of hours and decided to come back to see if anything had changed. I’m pretty glad I did, because about half of the people had left and it made the lounge more relaxing

It also made the temperature go down by about 5 degrees Celsius!

There are 6 Plaza Premium Lounges

This is a review of the Plaza Premium International Terminal 1 Lounge. There are 6 Plaza Premium Lounges at Pearson, each serving clients with different destinations.

Terminals one and three each have three:

The Plaza Premium International Terminal 1 lounge is near the E-Gates – around Gates 77-78, which also happened to be very close to my departure gate for Budapest.

Take the elevator and it’s right next door to the Air Canada Select lounge.

Once you get into the E gate area, just look up – there are signs everywhere that say “Lounges.” Follow those and you’ll have no problem locating the Plaza Premium International Terminal 1 Lounge.

As is usually the case for us, we got into this lounge with our Priority Pass. You can find out more about Priority Pass by reading this post. It’s a great way for frequent flyers to access over 1,200 lounges all over the world.

When we fly, we always take our Priority Pass to get into over 1,200 lounges at airports around the world (and get discounts at several restaurants!) If you travel, consider getting a Priority Pass Membership and stop paying for drinks and food at the airport!

The Plaza Premium International Terminal 1 lounge takes both the digital card and the regular card. So you can use either here.

Just present your card and your boarding pass, sign, and you’re in. It’s really that simple.

Don’t forget to get the Wi-Fi access code at the front desk. You’ll need it.

Despite the fact that it’s in a fairly busy terminal, the Plaza Premium International T1 lounge is really quite small.

It’s in the mezzanine in Terminal 1 and has a dining room and a place with comfortable chairs.

That’s pretty much it.

When it’s not busy, it’s comfortable. When it is, not so much.

This is one of those times when I thought that the reception folks were over-admitting guests. I feel as though the lounge was about 15-20% beyond capacity.

Or, at least, beyond any capacity that would make people feel comfortable here.

The lounge holds 112 people max. But it felt like a lot more.

“Basic” is a word I would use to describe the selection on the main buffet. You won’t find much more than this that is immediately available.

Of all the lounges I’ve been in, this place has the worst buffet selection.

That said, there were a few chefs in the background cooking made-to-order food. But I did not see a menu of any sort that I could order from. And even if I did have a menu, I’d probably be quite far back in line because there were so many people ahead of me waiting.

I was not really all that impressed with the food selection here. I arrived at about 5:30 PM. The main course on the buffet was beef teriyaki, fried cabbage, and steamed rice.

And that was generally it. There were a couple of soups, and only one of them was (possibly) vegetarian.

If you are a vegetarian, you might be disappointed here. Unless you think sitting on a lengthy international flight after having your fill of fried cabbage sounds like it’s a great idea.

Perhaps you’ll luck out and get a made to order dish!

They have a few desserts, and a lady told me the cookies were really good.

They have a few wines and only one beer – Molson Canadian – the Bud Light of Canada’s beer selection.

If you’re a person who wants top-shelf liquors, you won’t find them here. They have one kind of everything. Vodka, gin, rum, and a few others.

If you want something other than Bacardi or Smirnoff, you’ll have to go downstairs and pay for it at the bar.

I had a gin and soda. That was fine with me, as I’m not too picky. It was Gordon’s. Nothing special.

The Plaza Premium International T1 lounge has a soda machine with Pepsi products, a juice machine, and a coffee machine with various espresso-based drinks. They were pretty decent.

They have a basic selection of Higgins & Burke teas.

Again, this lounge is quite short on space (2600 square feet / 240 square meters). I have to assume the reported size includes the kitchen and storage areas, because it didn’t look nearly that big.

Amenities aren’t really a big thing here. They have Wi-Fi and showers. I guess that’s something!

There were plenty of newspapers and magazines to choose from here. If you want something to read, that shouldn’t be a problem.

There is only one shower here, and unless you have lots of time to wait, I wouldn’t count on getting one. While I didn’t need one during my visit, I did check it about 4-5 times and it was never vacant.

If you really want a shower and have the time, I’d put your name on the list as soon as you get here.

I can’t tell you how clean it was because I never got to check it out, unfortunately.

Wi-Fi is available. The password is available at the front desk. The connection is reliable and fast.

Plaza Premium International Terminal 1 lounge is open from 5 AM to 12:30 AM daily. You can get alcohol only after 11 AM.

The Plaza Premium International T1  lounge in Toronto wasn’t quite what I expected. Maybe it was because it was a Saturday and it was really busy. I like a lounge where you can sit in your own little corner and do some work.

There really wasn’t a place to do that here.

It was practically as crowded as the main terminal. Even when I came back later, it was busy, but not cramped.

Because the food selection was not great, and due to the lack of a decent place to set up and get some work done, I’d probably skip this lounge when I return to Toronto in a couple of weeks.

Or maybe I’ll give it another shot and update the post.

We have several memberships and airline status that allow us to access airport lounges all around the world.

If you want to learn more about airport lounges, start with our post on Is Airport Lounge Access Worth The Cost of a Priority Pass or Credit Card and also read more of our airport lounges reviews.

For More on Canada: When we travel, we use Lonely Planet

Where to Find the Best Craft Beer in Fredericton, NB, Canada
Next Post: Budapest Makery – A Unique Do It Yourself Restaurant in Budapest