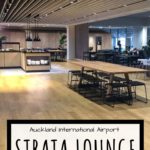 If you’re flying international out of Auckland International Airport in New Zealand, then you should check out the Strata Lounge Auckland.

My experience there was very relaxing.

And the third thing you’ll notice, if it’s important to you, is that they don’t have one shower. They have FIVE showers. Every one of them is spotless.

I’ve been in a lot of lounges, and sometimes the showers are not quite up to par.

These are clean and large. Pictures below in the Amenities section.

When we fly, we always take our Priority Pass to get into over 1,200 lounges at airports around the world (and get discounts at several restaurants!) If you travel, consider getting a Priority Pass Membership and stop paying for drinks and food at the airport!

To get to Strata Lounge Auckland Airport, simply go through security and navigate through the myriad Duty Free shops. After that, follow the signs to “Premium Lounges.”

Strata Lounge is at the top of the escalator next to Emirates and Qantas Lounges.

Who can use the Strata Lounge in Auckland Airport?

We use Priority Pass, and Strata Lounge is a member of that network. Simply present your boarding pass and your Priority Pass card, ID if asked, and you’ll get in.

Otherwise, you’ll have to pay a fee of $49. If you want to stay longer than the three-hour limit, you’ll pay $75. By the way, if that seems expensive, consider how much you would pay if you had a meal and a couple of alcoholic drinks in the concourse.

New Zealand ain’t cheap! $49 for three hours in a lounge with great food and drinks isn’t bad by comparison.

In addition to people with a Priority Pass, the Strata Lounge is also available for the following airline passengers who are traveling in Business Class:

As I mentioned earlier, the Strata Lounge in Auckland is very open. You can see clear from the furthest corner of the lounge to almost every other area in the lounge.

The entire back of the lounge includes floor-to-ceiling windows that give you a view of some of the newer shops in the redesigned terminal.

It’s not a tarmac view, but it’s not a bad view.

Unless my experience was just an anomaly, I don’t think you will be disappointed.

The food and drink selection here is quite good compared to many lounges I’ve visited in the past.

Today, I had the following:

I liked the gnocchi and vegetables so much that I asked to speak to the chef because I wanted him or her to know.

When he came out, he seemed  thrilled that I took the time to let him know I enjoyed his food.

I hope I made his day. He made mine with his great food!

In addition to what I chose, there was plenty of fresh fruit, other main dishes with meats, sandwiches, salads, and plenty of desserts, which I am told change daily.

The Strata Lounge in Auckland has plenty to drink. They don’t seem to skimp here on selection, as you see in may lounges trying to save a few dollars.

There is a soft drink machine with good selection, juices, coffee & tea, as well as plenty of beer, wine, and spirits.

Strata Lounge Auckland also has a coffee machine that delivers a pretty good latte, if I do say so myself.

And that’s saying something, because New Zealand (surprise) is well-known for having excellent coffee.

I won’t say you’ll get the same quality out of their coffee machine as you get in a shop here, but it’s good coffee nonetheless!

Amenities at the Strata Lounge Auckland

I know, “staff” is not an amenity. But sometimes I think good service is. I was here in this lounge for a couple of hours and was asked a few times how I was doing and if they could take this or that away.

I thought that was nice.

After I spoke to the chef, I talked to the lady who seemed to run the place and she just wanted to let me know I probably made the chefs day.

That was my intent, but it was nice of her to say.

Oh, and she also let me in on a secret. More on that below…

The Strata Lounge in Auckland airport has workstations that you can use. It also has a small area that sort of looks like a boardroom set up.

So if you have a meeting that doesn’t require a ton of privacy, you’re set here.

Did I mention that the Strata Lounge in Auckland Airport has a shower?

Did I mention that they have FIVE?

That means no appointments needed here. If you want a shower, you just go take one. Simply let them know if you need to borrow a towel. They have them.

They just don’t leave them in the shower room.

And don’t forget to let them know when you’re done so they can clean it afterwards.

The bathrooms are also very clean – at least when I was there.

Strata has lots of newspapers and magazines. Including publications in Mandarin.

Like all lounges, of course they have it. There are username and password cards throughout the lounge. And it seems to be decently fast, so you won’t have issues, whether you’re just connecting to Facebook or to your work VPN.

I’ve noticed these are starting to take hold as amenities in other lounges, but they’re still not that common.

Strata Lounge in Auckland has a good-sized children’s playroom, complete with a few toys and a large flat-screen television that plays programs suitable for the young ones.

There’s not a lot in here, but it’s nice for parents to have a place to take their kids – especially when they get restless and need to unwind!

You most likely won’t have to even leave your chair to see the latest status on your flight. There are screens throughout Strata Lounge in Auckland.

And it’s so open here that you can see them from everywhere.

It’s not much to look at, but at least you have a view. It’s of some of the newer shops in the airport. Oh well, you can’t win them all! No watching jets take off and land.

I told you earlier that I was going to let you in on a secret. Well, here it is. Strata Lounge Auckland will offer sleeping pods in the near future.

That means you can come in for a few hours and have a nice rest in your own space. No word on when that will happen.

I’m just told it will. Eventually.

I can’t wait to see this if I get back to New Zealand.

The one thing this lounge is missing is a place to plug in your stuff. There are a few power points in the lounge, but not many. That’s a huge miss if you ask me.

People want to plug in, and if you’re paying $49 for a 3-hour stay, there must be outlets everywhere.

5 AM to 1 AM Daily. But, according to a posted sign, this schedule may vary depending on flight schedules.

We have several memberships and airline statuses that allow us to access airport lounges all around the world.

If you want to learn more about airport lounges, start with our post, Is Airport Lounge Access Worth The Cost of a Priority Pass or Credit Card?

You can read more of our airport lounges reviews as well.

And if you want to get a Priority Pass, click this link!

For More on New Zealand: When we travel, we use Lonely Planet

Budapest Makery – A Unique Do It Yourself Restaurant in Budapest
Next Post: How To Get To Dry Tortugas National Park and What To Do There