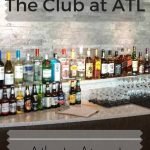 Right now, The Club at ATL is the only Priority Pass lounge in Atlanta airport. The only real lounge, anyway – there are two Minute Suites there, too.

That’s strange, because Atlanta’s Hartsfield-Jackson International Airport has been crowned the world’s busiest airport for passenger traffic every year since 1998.

Each year, more than 100 million passengers pass through its 200 plus gates to either transit or navigate the airport’s miles and miles of concourses and rail lines on their way home.

Delta Airlines has the lion’s share of lounges in the airport, which mainly serve Delta’s passengers.

You can find at least one Delta Sky Club in every concourse. However, The Club at ATL is one of the most sought-after airport lounges for the many passenger who are not flying with Delta.

Getting To The Lounge at ATL

The Club at ATL is located in International Terminal F. From the Domestic Terminal, the “Plane Train” connects every terminal at the airport.

As soon as you arrive at Terminal F, proceed to the main level, then follow the sign to direct you to Airport Lounges on the Mezzanine floor.

That’s where you’ll find The Club at ATL.

Remember to give yourself lots of time to get back to your gate. If you’re not flying out of the International Terminal, you’ll need to hop back on the train and continue on to your departing gate.

Get a Priority Pass today to access this lounge!

Getting into The Club at ATL

A daypass to The Club at ATL costs $40. You can either purchase it online, or pay at the front desk.

There are several loyalty programs that allow you to use the lounge. For example, Qatar Airlines gives complimentary lounge access for its International Business and First Class passengers on its Atlanta to Doha route.

Another venue to give you an access to The Club at ATL is by using the Priority Pass membership. It gives you access to 1200+ airport lounges all around the world.

They are several tiers of Priority Pass access – if you are not familiar with airport lounges or Priority Pass, check out our post Is Airport Lounge Access Worth The Cost of a Priority Pass or Credit Card.

As of 2018, this is the only Airport Lounge that accepts the Priority Pass in the Atlanta airport.

The Club at ATL Layout

The Club at ATL is not a big place, but it offers many seating arrangements – you can sit at the bar, a high-top table, low table, as well as individual chairs and sofas.

As soon as you check in, the pathway opens up to the main part of the lounge, and you can see the bar as the main focal point of the space.

A low wall separates the bar from individual sofas in the middle of the room, which is equipped with many electrical outlets.

In front of the big windows, you’ll find a row of chairs facing the busy tarmac below.

Those big windows fill the lounge with lots of natural light.

The main food table is located at the end of the room, next to the hot beverage/espresso machine and the water & soda refrigerator.

There are several other food tables throughout different areas of the lounge.

The Club at ATL also provides a business area where travelers can plug in their laptops at a workstation.

This is separated from the lounge main space for a quieter, more private experience.

Food and Drink in the Club at ATL

The major draw of any airport lounge is, of course, the food and drink. Don’t expect to have a full meal here. They serve different courses throughout the day, but only small portions, like most lounges.

There is plenty of coffee, water, sodas, and juices throughout the lounge.

You can go to at least two stations inside the lounge to get to any of these.

Snacks such as chips and trail-mix and fruit are also available.

There is a fully equipped bar with complimentary alcohol such as beer, wine, and some common drinks. You can also purchase some of the higher end liquor here.

The bar does not have beer on tap. It’s all bottles.

Amenities in The Club at ATL

The Club at ATL has other typical airport lounge amenities:

The Club at ATL is a great part of the Priority Pass program and it is crowded throughout the day. This is especially true in the evening hours right before many international flights are departing.

Nonetheless, it definitely beats waiting for several hours at your crowded gate with fellow passengers.

Even better, you don’t have to pay for that overpriced airport food and drink in the food court.

The staff is friendly. Although at busy times, you’ll sometimes have to be patient for table cleaning and for food to be restocked.

Want to visit this lounge when you transit through Atlanta? Get a Priority Pass today to access this lounge!

Check out our other airport lounge reviews.

Rose Hotel Yazd Review – Places To Stay In Yazd, Iran
Next Post: Should You Register Your Travel With Your Embassy? Maybe. Here’s How.