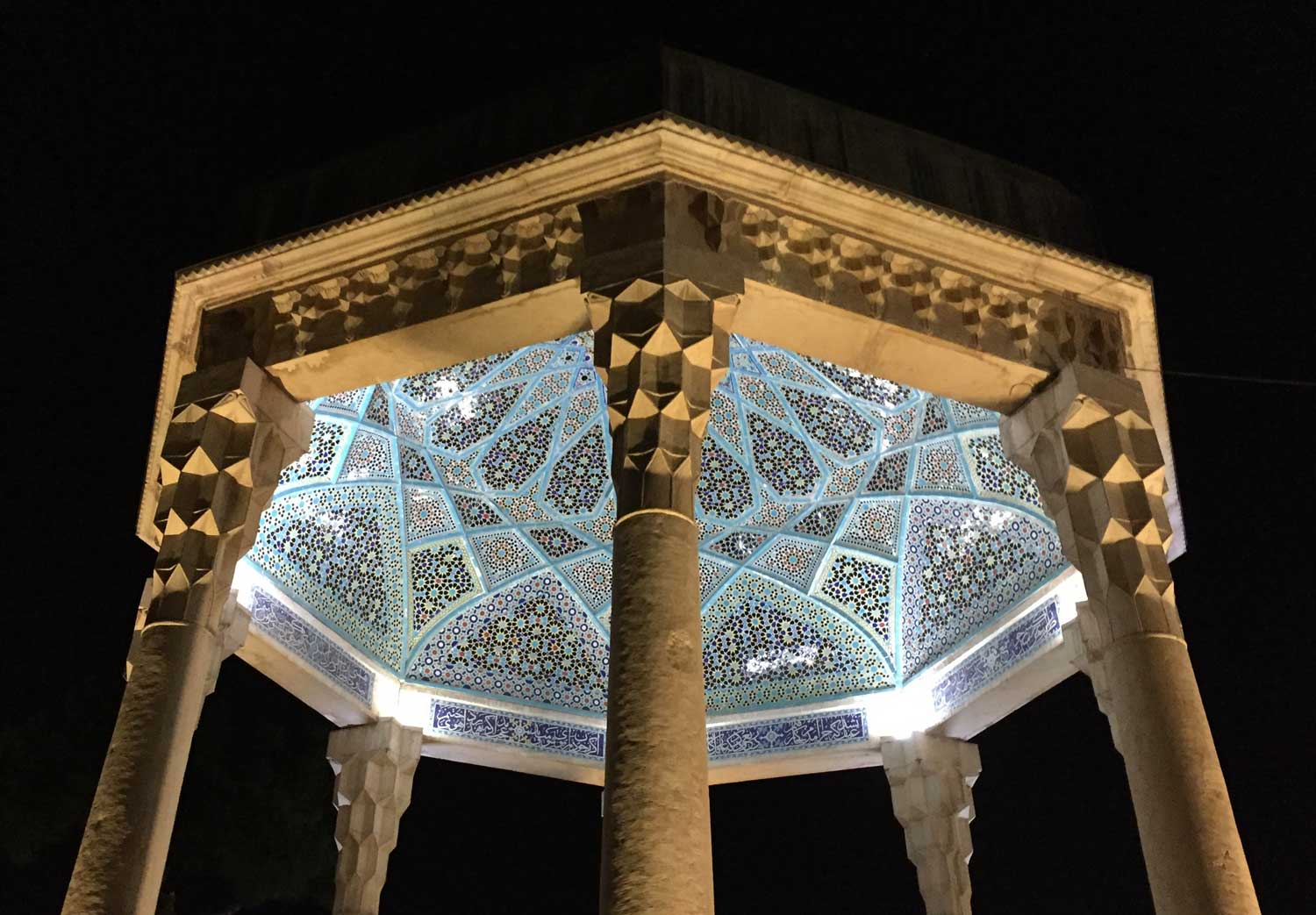 Persepolis, Hafez, and More: Things To See In Shiraz, Iran

There are so many things to see in Shiraz. It’s the sixth most populous city in Iran and is the capital of Fars province. It is also the city where Shiraz wine originated.

Although alcohol is no longer permitted in the country, residents still speak fondly of the world-renowned Shiraz wine that was once produced here.

Shiraz was definitely on my list of Iran destinations when I was planning my trip. Like most places in Iran, Shiraz is safe for tourists and you will be greeted warmly by the people in the city, just as you will everywhere else.

Things to see in Shiraz

Here is my list of the top things to see in Shiraz, Iran along with some photos I took in each place.

The Pink Mosque, or the Nasir ol Molk mosque, is one of the most uniquely beautiful places of worship I’ve visited. It was built in 1888.

The first thing you will notice when you get here is, well, it doesn’t look like anything special – outside. You just pull over to the side of a busy street, get out of the car, and walk to a building that doesn’t look like it’s even a mosque.

I wondered to myself why we were walking into such a plain building. You need not worry! Once inside, you are immediately bathed in colorful light.

The Pink Mosque in Shiraz is a great spot for Instagram photos because of the amazing colors and the stunning pink tiles that give the mosque its nickname.

You may take all the photos you want inside, but no tripods allowed though.

A bit disappointing, because a tripod would mean much better photos!

Iranians don’t need to go to the Leaning Tower of Pisa. They have their own because one of the corner towers on the citadel is leaning noticeably.

The structure is located right downtown and you can’t miss it because it is quite huge. It’s the focal point of the city and contains a mosque, bath, and a bazaar.

It was built during the Zand dynasty and gets its name from Karim Khan, the dynasty’s founder.

Arg Karim Khan in Shiraz is incredibly well-preserved, given that it was built nearly one thousand years ago! There are great restaurants and shops in this area as well.

You’ll see plenty of orange trees here with fruit about the size of a mandarin orange. You should try one of them. Chances are, you won’t like the taste.

It’s very bitter with just a hint of sweetness.

Shah Cheragh is both a mosque and a funerary monument in Shiraz that stands out due to its dome. While most mosques’ domes are fairly circular, you’ll notice that the dome on this one has quite a unique shape that comes to a point at the top.

Definitely a place to add to your Shiraz tourism bucket list.

The mosque would be impressive on its own from the outside, but when you walk inside, you’ll see something unlike anything you’ve seen before.

The walls and ceiling of the mosque are intricately decorated with mirrors. And not just a few hundred or a few thousand mirrors either.

Over a BILLION tiny mirrors make this one of the most impressive places I have ever seen.

The staff and volunteers here are very friendly. We drank tea and ate biscuits with them and they gave us postcards of the mosque to take with us.

Men and women enter the mosque through different entrances and women must wear a full-length robe with a hood.

Qu’ran gate is the Northeast entrance to Shiraz. It was built in the 10th century but was damaged by several earthquakes. The current gate is a restoration.

Unfortunately, we didn’t have a chance to stop here, although we seemed to pass by it once or twice a day!

It’s one of the Shiraz attractions we’ll have to keep on our list for next time.

Two large handwritten Qu’rans were kept here at one time. Those leaving and entering through the gate were said to be blessed as they went on their journeys.

The Eram Botanical Garden is one of the oldest in the world – a UNESCO World Heritage Site, and one of the main Shiraz points of interest. It was created in the 13th century.

The Qavam House, which sits in the middle of the garden, has walls that are decorated with verses from the poet, Hafez (see below).

Beautiful flowers and trees adorn the garden and it must be a wonderful place to visit when the temperatures outside are oppressive in the summer.

I can imagine enjoying the shade and the (relatively) cool mountain breezes from the hillside above.

It is said that all Iranians have two books in their homes – the Quran, of course, and a book containing the poetry of Hafez.

Hafez lived from 1315-1390. He was known for his love poetry, his love of wine, and his disdain for religious hypocrisy. His poems are frequently used in art, music, and sometimes just in everyday conversation among Persians.

The tomb of Hafez is second only to Persepolis in terms of the number of visitors it attracts each year. I suspect this is mainly because it is so popular with Iranians themselves.

While we were here, it seems we were the only foreign visitors. You must add Hafez’s tomb to the list of Shiraz historical places to visit.

I think the daytime is probably the best time to visit the tomb and garden if you’re going to take photos. I was here at night due to our busy schedule.

During the day and early evenings though, the tomb is far busier, so you may prefer the relative emptiness at night.

Of all the things to do in Shiraz, the tomb of Hafez is a must-visit.

Another of Iran’s famous poets, Saadi, was born in 1210 and died around 1292. Saadi was exceptionally well-traveled by anyone’s standards, and even spent seven years as a slave after being captured during the Crusades.

He was known as a man of the people during his life, preferring to befriend and hear the stories of common people, the oppressed, and travelers from other lands.

His poetry reflected this and told their stories. When Saadi returned to Shiraz mid-life, he was welcomed and held in the highest regard by the rulers and citizens alike.

He spent the rest of his life in the city.

While not exactly in Shiraz, I’m including as one of the things to see in Shiraz because it’s one of the side trips you will definitely want to do while you are here. It’s located less than 2 hours from the city.

When you first arrive at Pasargadae, you may notice it actually doesn’t look that impressive. All you’ll see is very flat land, small mountains off in the distance, a few small hills in the area, and a couple of things that look like “something.”

It really doesn’t look like much, to be honest. But the relative emptiness of the space can’t take away from the history that is present here to this day.

Pasargadae was the capital of the ancient Achaemenid Empire and was constructed by Cyrus the Great starting in 559 BC.

There is no hard evidence that the tomb in the picture above belonged to Cyrus the Great, but it is commonly believed by archaeologists that it was.

When Alexander the Great destroyed Persepolis (see below) he visited the tomb and ordered one of his men to go inside. Although no inscription survives because of natural wear on the tomb, it’s believed that the original read:

“Passerby, I am Cyrus, who gave the Persians an empire, and was king of Asia. Grudge me not therefore this monument.”

Go and visit. Before you do, however, read a bit about Cyrus the Great and his impact on this area of the world. When you do, this site will have more meaning to you.

Lastly, the jewel of Iran – Persepolis. This was the highlight of my trip. I’ve been to Petra and really love seeing ancient ruins like this. You really feel transported back in time when you come to Persepolis.

Looking at the columns and monuments, you have to wonder how, exactly, people 3,000 years ago could have accomplished such tasks of engineering.

We stayed at Persepolis for about 3 hours. If you’re someone who really pays attention to all the little details, I imagine you could stay here all day.

I’m more of a “big picture” person, so just gazing in wonder at the implausibility of a place like this is amazing for me. I suggest walking up to the top of the site and admiring it from above.

Then, work your way down to the lower level.

You’ll want to get here early. We were here in March and the sun was quite warm even for this time of year. If you’re here in summer, it’s going to be very hot. Be sure to bring plenty of water with you and apply your sunscreen.

There’s not a lot of shelter here from the sun.

In addition to the architectural, historical, and religious things to see in Shiraz, there are lots of good restaurants here as well – too many to list here.

I barely scratched the surface! In addition, Vakil Bazaar is highly recommended. Because of the time restrictions, we didn’t get to go there. But that’s OK. We visited a lot of great bazaars in the country.

And you have to leave some good things for the next time you visit!

When you visit Iran, Shiraz has to be at the top of your list of places to visit. There are so many things to see in Shiraz that you will never get to do them all.

But spend a few days here.

Get a nice feel for the city. Talk to the locals. Visit the shops. Then, when you realize you can’t do it all, make your plans to come back again.

Considering visiting Iran? Read our post, Things to Know Before You Go To Iran. And if you’re from Canada, the U.S., or the U.K., you’ll need a visa before you arrive. Here’s how to get one.

For More on Iran: When we travel, we use Lonely Planet

Is Iran Safe For Tourists and Should You Go to Iran Now?
Next Post: Premier Lounge Jakarta Review – CGK Priority Pass Lounge