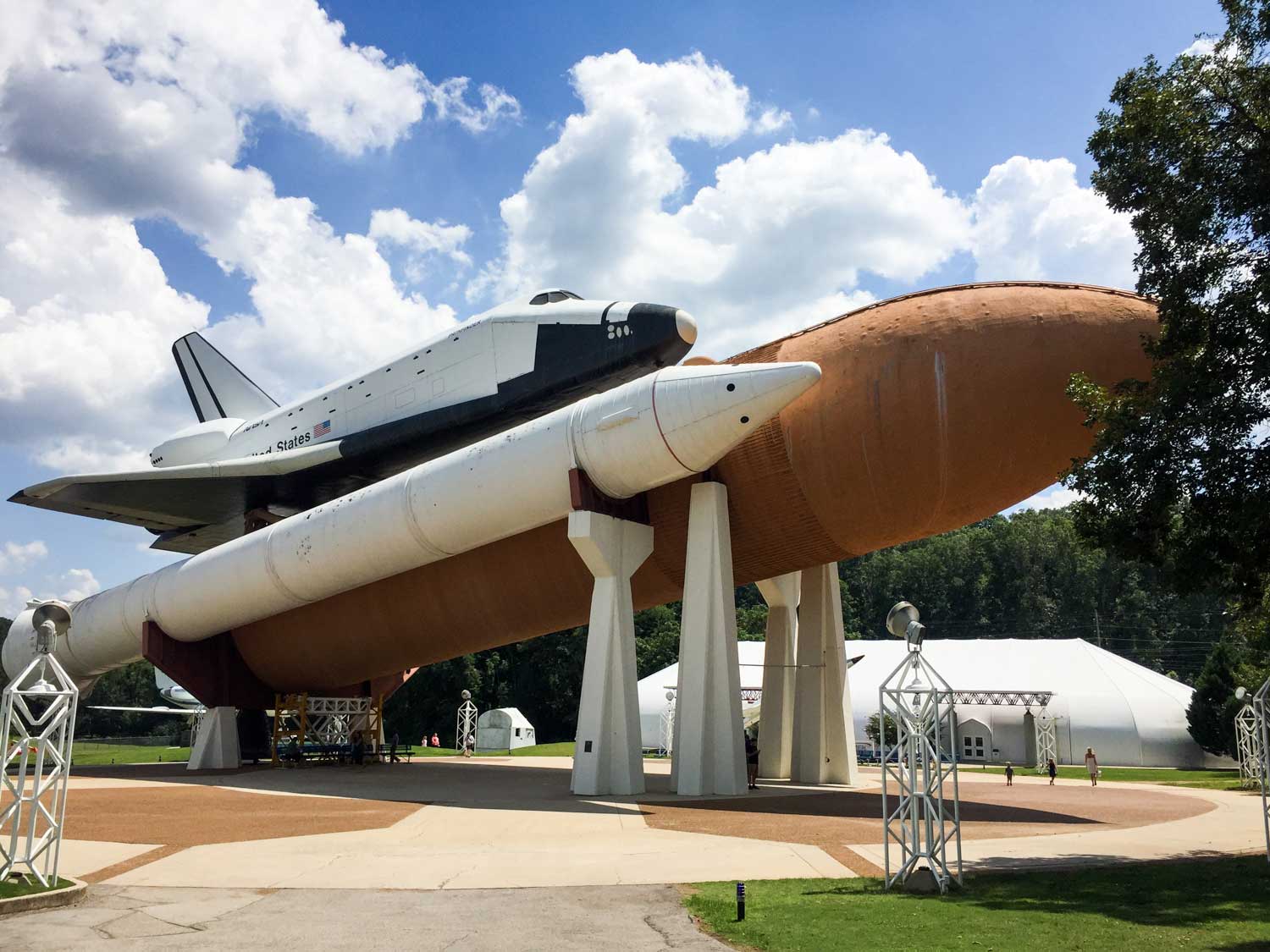 How to Visit the U.S. Space and Rocket Center in Huntsville, Alabama 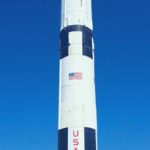 If you’re traveling through the Southeastern United States and those travels happen to take you through Huntsville, Alabama, then we’d like to highly recommend that you take at least a half a day and visit the U.S. Space and Rocket Center there.

The center is a Smithsonian affiliate and the official visitor’s center for NASA’s Marshall Space Flight Center. “Rocket City USA,” as it is affectionately known, is one of the top things to do in Huntsville.

Since we have a lot more free time on our hands these days, Halef and I decided that we would start taking a couple of weekend trips every month from Atlanta.

This time, we decided on Huntsville, mostly due to its proximity to Atlanta and the fact that neither of us had ever been here before.

Getting to the Space and Rocket Center in Huntsville

If you can get to Huntsville, then you’re mostly done. Just look for the rocket.

Not kidding. The replica of the Saturn V Rocket on the U.S. Space and Rocket Center grounds dominates the skyline of Huntsville.

If you can’t see it, then you’re just not looking or you’re probably driving away from it. After all, the Saturn 5 rocket is 363 feet/111 meters high.

If you still don’t see the rocket, then just ask someone “Excuse me. Where is the space and rocket center?” Be prepared for the person to look at you funny, turn around, and point to the very obvious gigantic rocket and say “Seriously?”

When we went, we honestly thought this would be a couple of hours, after which we would make our way back to Atlanta or just go see something else.

We’re glad we had nothing else planned, because visiting the Rocket Center took us over 5 hours.

And we could easily have stayed for another hour or so. On our way out after 5 hours, we saw a couple of things we missed altogether.

So, if you’re going, we’d recommend planning you visit for at least 4-5 hours.

And if you’re super interested in the technology behind space exploration, stay for the whole day.

There is so much to see here that only spending a couple of hours is not worth the price of the ticket. By the way, we bought the combo ticket which also gives you access to the IMAX theater.

You can choose your movie.

We asked what the best one was. The attendant said “Journey to Space” – narrated by Patrick Stewart.

She was right. It was great.

Things to see at the US Space and Rocket Center

We were here for hours, and there is so much to see here that it was difficult to narrow it down to a list.

But we like lists, so here are a few things you need to check out at the U.S. Space and Rocket Center.

The Saturn 5 Rocket was incredible and spanned the entire length of a massive building. It was built in Huntsville and was the rocket responsible for sending humans to the moon.

The five engines on the rocket generate 1.5 million pounds of thrust each. At the time, these V-5 engines were the most powerful engines ever built.

There is a simulator that will give you some idea what it must have felt and sounded like when the engines were tested before they propelled us to the moon.

A free tour of everything Saturn V-related is offered. We highly recommend it. The guides know a lot of cool trivia and can answer your questions.

Unless you’re the 10-year-old girl who was on our tour that had very specific questions about the most minute details.

You know she’s going to Mars. You just do.

Yes, there’s actually a moon rock on display. I personally wasn’t totally impressed with this. I mean, it looks like a rock. A dull, grey rock.

But, judging from the reaction to it, and the way Halef looked at me when I said “meh,” I was in the minority here.

The rock is basalt, which means it is volcanic. But there are no volcanoes on the moon. So where did they come from? Hmmmmmm. My guess is aliens planted them to distract us from whatever cosmic invasion they are planning.

But the so-called “scientists” say that maybe the moon broke off from Earth a few billion years ago and the rock is actually an earth rock.

This was one of those things we only knew was there when we were getting ready to leave. We stayed for another 30 minutes as a result.

From sleeping quarters to the toilet, this is a pretty impressive exhibit that will give you a good idea – without the weightlessness, of course – of what it must be like to live in outer space for an extended period.

One of the things that most caught me off guard here was that astronauts sleep “standing up.” But when you think about it, it really doesn’t matter what position they sleep in.

They are equally weightless in any position.

I imagine that even with all the training astronauts go through, seeing a “stand up” bed still takes a bit of getting used to…

…but probably not as much as this suction toilet.

This is really cool – for a couple of reasons. First, you’ve all probably seen this in any film about moon landings. It’s the triangle thing that plummets back to Earth suspended by a few parachutes just before it crashes into the ocean.

Second, it seems impossibly small for 3 grown men. I know they only had to be in this thing for a few hours, but you are super cooped up for those hours and you’re in a hulking space suit to boot!

You need to walk around the entire module though.

If you don’t, you’ll miss where “the burn” took place on re-entry. It’s really cool to see and gives you a sense of the just how close to death every trip to space brings an astronaut.

And I wish I didn’t forget to take a picture. Sorry!

Pathfinder was never used for flight. But it was used to train astronauts. Along with the model of the Saturn V rocket outside the center, this is the most imposing artifacts you’ll see.

The shuttle, the solid fuel boosters, and the external fuel tank. It’s all there and it’s massive. In addition to being visually impressive, it’s also good cover from the sun when you’re there during the heat of summer.

Also check out the Gulfstream II that was used by the astronauts to learn how to land the shuttle.

It’s right next to Pathfinder.

There are a couple of notable rockets here – including the ones that launched the first satellite and human into space. But even if none of them were famous, they’d still be cool because they are freakin’ rockets!

The largest rocket in the display is the Saturn I rocket, which launched, literally, the USA’s entry into large payloads.

It’s dwarfed, however, by the Saturn V, just a short distance away.

While you’re in that part of the complex, there is a very cool Chinook helicopter on display.

The U.S. Space and Rocket Center has several IMAX movies you can choose from. Specifically, we saw Journey to Space, a history of the space program and what’s next for NASA and private companies.

It was a very well-done film and we enjoyed it.

Popcorn, sodas, and various other (expensive) treats are available to enjoy. One thing to note – the theater is cold. I was shivering by the time we left.

Alabama is not exactly a place you normally need a sweater, but if you have one, you’ll be lucky!

One of the cool things about the movie took place behind the scenes. When the movie was done, you can watch the guy in the booth get the next movie ready. It’s not as simple as throwing a reel on the projector.

He has to thread the movie through a fairly intricate system of reels and gears. It really is cool to watch.

And it’s easy to watch, considering his entire booth is made of glass!

We admit to being a bit jealous. When we visited the Space and Rocket Center, the INTUITIVE Planetarium did not exist.

The planetarium offers daily shows like “Destination: Solar System” and “Our Place in Space” along with special evening events like “Astronomy For All” and “Cocktails and Cosmos.”

We can’t wait to visit again to check this out.

We made a video. I’m sure it’s quite easy to tell how much fun your two 40-something hosts were having at the Rocket Center!

Other things to do

Of course, no museum in the U.S. would be complete without rides, and the U.S. Space and Rocket Center is no different.

There are a couple more things to do, but those rides are the main three. We didn’t do either of them.

Neither of us had the desire to be flung a couple hundred feet in the air or to spin till we puked.

You may choose differently!

Food and Drink at Mars Grill

The Mars Grill at the Space and Rocket Center has something for just about everyone. From pizza to burgers to pho. There are even meatless options for vegetarians.

And if you want to make some dishes vegan, it’s as easy as skipping the cheese or sour cream.

Mars Grill is also fairly reasonably priced for a restaurant at a major tourist destination.

Is the U.S. Space and Rocket Center worth the trip?

As an adult, you feel like a bit of a kid when you come here. If you were born in the late 50s, you probably still remember in 1969 when Neil Armstrong and Buzz Aldrin walked on the moon.

If you were a child of the 80s, you no doubt sat stunned when the Challenger exploded a few moments after lift-off. That Tuesday was my “Where were you when Kennedy was shot?” day.

For others, it was Columbia.

It’s kind of interesting to me that I experienced all this, but that there is also way more to come.

It’s fun to imagine that some of the kids we saw in Space Camp today just might be either on the ships or playing a supporting another role when in 15-20 years, people are landing on Mars.

The space and rocket center was an enjoyable experience. If you have any interest in space at all, go. It’s worth the money.

And prepare to spend some time here. There’s a lot to do.

Plan Your Visit to the US Space and Rocket Center

Here are a few logistical things you’ll need to know before you visit “Rocket City USA” in Huntsville.

Where is the Space and Rocket Center?

Here’s an address you probably won’t forget. But in case you do, we’ve also provided a link to Google Maps for you.

Good news! It’s free to park at the U.S. Space and Rocket Center, including RVs and campers.

US Space and Rocket Center Hours

Tickets for the Huntsville Rocket Center

Marshall Space Flight Center Bus Tour
Note: You must be a U.S. citizen to take this tour
Adult (13 and up): $20
Children 4 and under: FREE

Blue Mosque, Istanbul – What You Need to Know Before You Visit
Next Post: Nha Trang Cooking Class at Lanterns Vietnamese Restaurant